I met Ranger Dylan Shoemaker around 9:00 in the park.  He had towed a gas powered lift from Stephan Foster.  Dylan wanted to make the bat house more noticeable by fastening a BAT CROSSING sign on the bat house in the Big Shoals loop.  I believe the bat house is occupied by Brazilian Free Tail Bats and possibly Evening Bats. Dylan showed me how to operate the lift and together we got the sign installed.  I then got off the lift and took some photos of Dylan on the lift. 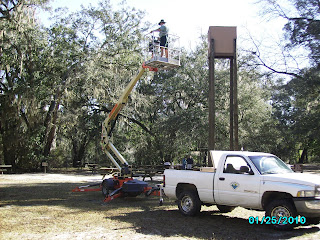 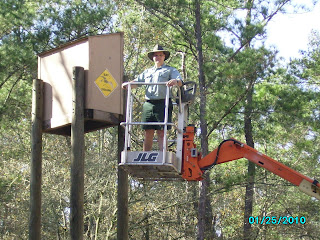 Dylan knew I was planning on cleaning the roof of our Carriage fifth wheel.  He offered the lift to assist with that chore. 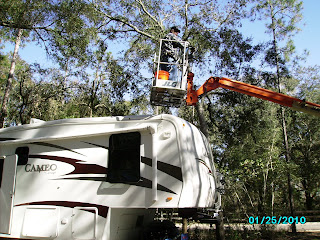 Dylan had a guided interpretive tour to give in the park along with a hike to The Big Shoals.   So while he was working on that, Joyce helped me as I cleaned the roof of our rig.  I started by blowing off leaves with a gas blower.  I used a bucket of water and Dawn dish washing soap along with a stiff brush to scrub the roof. 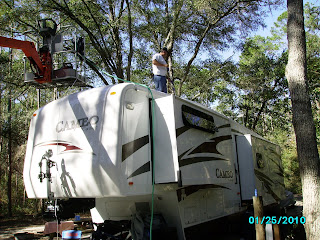 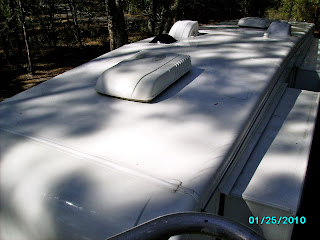 After cleaning the roof, I finished by cleaning the entire outside of the rig.   We both think it looked brand new after we were done.

After cleaning up and loading up the lift.  I traveled to Stephan Foster to pick up the park’s brush fire truck.  Dylan had asked me to take it to Lake City for a 2:30 appointment at a tire shop.  Dylan was expecting to be busy with the park tour.  The brush fire truck needed a spare tire exchanged. 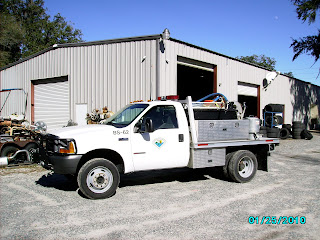 The truck is used by the Park Service for use on controlled forest/ brush burns. It carries 300 gallons of water.   Dylan had used it last week at Oleno State Park when he assisted with their forest burns.  I thought it unfortunate that although the truck only has 15K miles on it, the Park Service has already replaced 4-5 of the 19.5 inch tires as they have been blowing out or suffer side wall cuts.  The tires are expensive and heavy.  It was a chore getting the spare down and then back up on the very top of the truck.

I was back to Stephan Foster by 4:00 and home by 4:30.  I caught up with Dylan when he stopped by our rig.  He will be off for the next 6 days. When he starts back to work we plan on hitching up and moving on.  We are looking forward to moving on and continuing our adventure.

Posted by Darren and Joyce Romero at 8:34 AM