Laundry Day, and Mountain Bike Ride along the Suwannee River

Today was laundry day so Joyce took the laundry to Stephan Foster Folk Culture Center.  She then drove to Lake City to do some shopping.  I stayed home at Big Shoals State Park with Maggie and Rico, letting them lay outside in the sunshine most of the day.

In the afternoon, I decided to go for a bike ride following the routes that the Ididaride cyclists took this past Saturday through the Big Shoals Public Lands and State Park.  First I rode up and down Road 1 noting that it was still very muddy and had very large water filled gullies.  That just made it more challenging and fun!  When I got back from that ride, I checked on Maggie and Rico who were just fine lying outside by the rig. 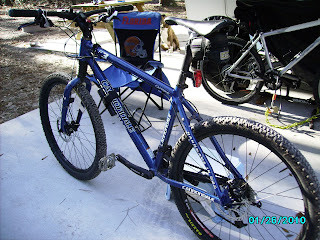 Next I took a ride out to The Big Shoals along the river.  This was a much more technical ride with lots of tree roots, dips in elevation and narrow gaps between trees to ride through.  I picked up some Ididaride route arrows that were left out on the trails. 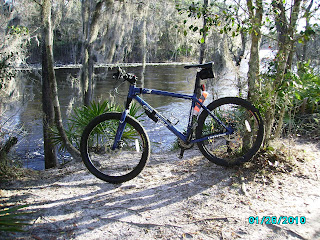 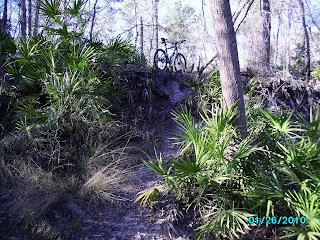 I rode alone, which is why I took pictures of my bike along the trails.  I’ve had this bike for three years, it’s a Cannondale F3 hard tail with hydraulic disc brakes.  We carry two mountain bike hard tails with us.  One for each of us.  We also carry a tandem road bike with us.  When we are parked, we store all of them under the kingpin area of the fifth wheel where they are kept locked and often covered to further protect our bikes from the elements. 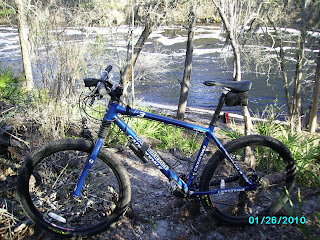 The river was really moving along today and appeared to be higher, although I didn’t know the official height.  I love this shot of the moon rising in the top center of this photo.  This area is known as the beach and a couple weeks ago had sand out past the trees that are now deep in the river. 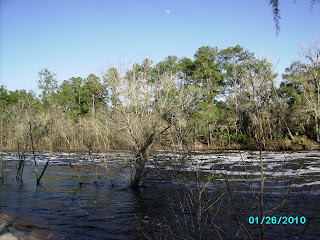 Joyce got home about the same time I did at 4:30.  We cleaned up, fed Maggie and Rico and got ready to go back out.  We took Dylan to Brooklyn Pizza in Lake City.  We’ve enjoyed working with/ for Dylan and wanted to treat him.  Dylan advised he’s having difficulty finding someone to fill our volunteer position.  So if any of you are still interested please give him a call at the phone numbers in my earlier post or via Stephan Foster Folk Culture Center State Park.

We called it a night after watching American Idol.

Posted by Darren and Joyce Romero at 7:44 AM