Kayaking on The Suwannee River

January 14, 2010.  Not a very active day.  Moderate temperatures and our last night of sub-freezing temps. Apparently Tallahassee and the surrounding area had broken a record with 14 nights of consecutive sub-freezing temps.  A record held since the 60's.

We went to Live Oak for lunch and shopping.  I picked up my prescription glasses.  Let me just say that I won't be wearing them regularly!  We went to a local restaurant, the Brown Lantern and had a good late lunch.

That evening I spoke with Ranger Dylan Shoemaker and made plans to kayak The Suwannee River the next day.  I pumped up our Sea Eagle 370 and prepared for our kayak adventure.  That night we watched the movie Inglorious Bastards that we rented from a Red Box.  This was the first time we had used a Red Box.  The movie itself was gory but interesting.

January 15, 2010.  Overnight temps were in the 40’s, but it was warming fast and expected reach 74. I continued to make preparations for our river adventure and thus I didn’t have time to update the blog.  Dylan showed up around 10:00.  I followed him over to Stephan Foster Folk Culture Center where we parked his car for the return home after our kayak adventure.  We picked up a park kayak for Dylan from the workshop and brought it back to Big Shoals in my truck.

By 12:00 we were on the river having launched from the Big Shoals Canoe Launch, which is really a set of steep wooden stairs into the river.  The river level was 53.5 feet above mean sea level which is considered low.  The river wasn’t flowing very fast perhaps only 2-3 mph. 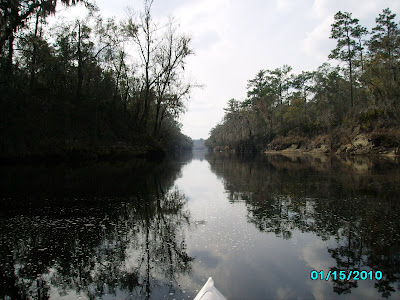 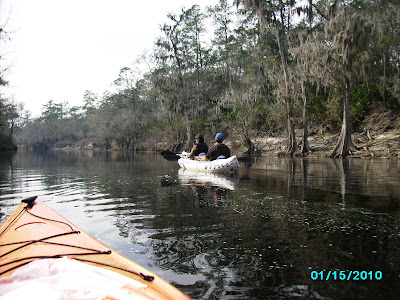 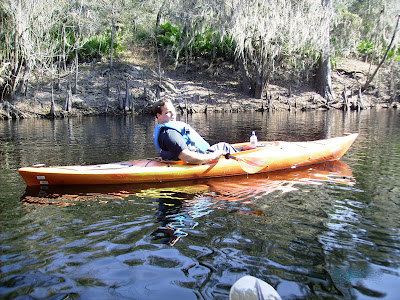 As we approached The Big Shoals on the Suwannee River, we made our planned exit at the portage location just upstream. 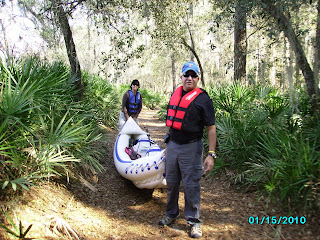 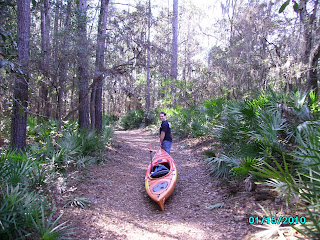 The river was too low to safely cross The Big Shoals due to the exposed rocks.  Just a couple of weeks ago the river was at least a foot higher. 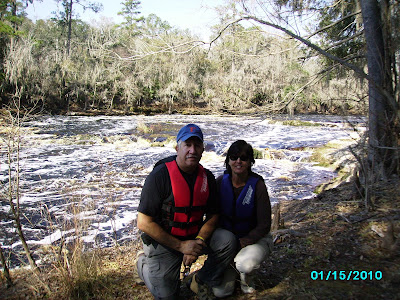 We did successfully navigate over The Little Shoals and a series of other small rough water areas. 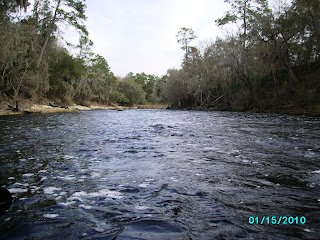 However, we all got stuck on different boulders in shallow white water just before this shot below.   We started to go sideways, much managed to rock ourselves off the limestone boulder.  It would not have been fun to take a dip in the cold water.  The Sea Eagle did well as we didn't experience any punctures. 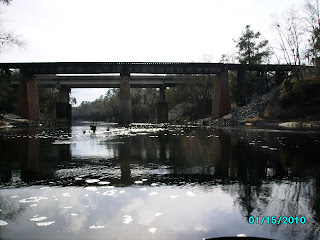 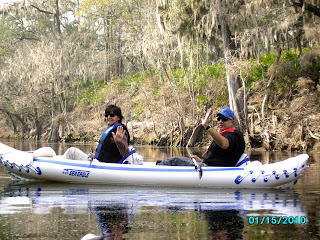 There's a lot of deadwood logging going on in the Suwannee River.  Loggers are removing logs that were originally floated down the river around the turn of the 19th century from Georgia but for whatever reason sank in the river.  This old wood has become valuable and is often used as hardwood flooring. 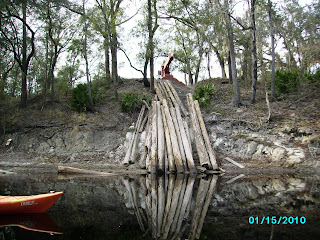 We came across several docks along the Suwannee.  Some were very impressive, others didn't look safe to walk on, but have been there for years. 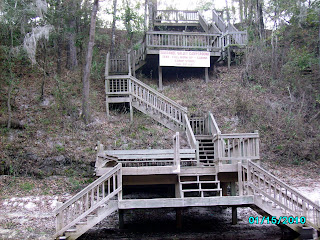 I guess this rickety old dock is a good gage of the median water level. 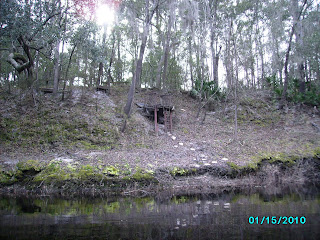 We made it to Stephan Foster Folk Culture Center just before 4:00.  After 3.5 hours in the kayak, we were both ready for the trip to end.  Dylan said the river would have flowed faster if the water level was higher.  The river right now doesn't even register on the depth scale at the Stephan Foster Canoe launch below. 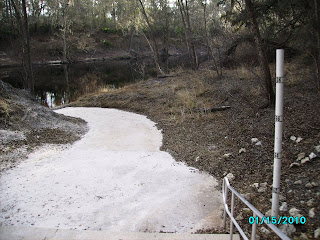 We deflated our kayak and loaded it into Dylan's car for the ride back home. By far, this was one of our best days at Big Shoals State Park. The weather cooperated after weeks of cold temps. We are not sure if we will get another chance to kayak on the Suwannee River as we plan to move on the first week of February.  So if you ever come to visit this area be sure to take a trip on the Suwannee River.

Posted by Darren and Joyce Romero at 9:21 AM