This park commemorates the site of Florida’s largest Civil War battle, which took place February 20, 1864. More than 10,000 cavalry, infantry and artillery troops fought a five-hour battle in a pine forest near Olustee. Three U.S. Colored Troops took part in the battle, including the now famous 54th Massachusetts. The battle ended with 2,807 casualties and the retreat of Union troops to Jacksonville, where they stayed until the war’s end just 14 months later. In 1912, when many living Civil War veterans still attended reunions, the battlefield became the state’s first state park. Olustee Battlefield has a visitor center with historical information and artifacts. A reenactment is held every February and a Civil War Expo takes place in late summer. Scenes for Civil War movies, including the 1989 movie Glory, have been filmed during the reenactments. 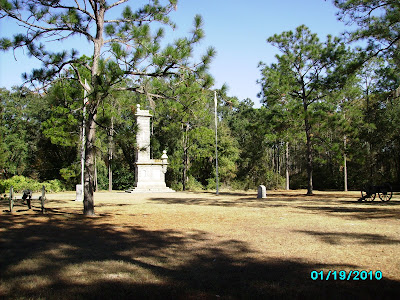 The tractor Gary was using at the Olustee Battlefield had a broken clutch cable.  Although it was suppose to be his day off Gary needed to fix it and finish up some work there before bringing the tractor back to Stephan Foster.  He asked me to go with him to help him replace the clutch cable.

At 7:45 a.m. Gary and I left Big Shoals headed to a parts store in Live Oak to pick up the clutch cable.  Joyce had decided to stay home and later go to Stephan Foster to do the laundry.  After all, it was Tuesday “laundry day”.

After a short ride we arrived to work on the tractor in the battlefield were Gary had to leave it.  After a lot of effort, we were able to get the cable installed and Gary was able to continue “bushwacking” the battlefield in preparation for the upcoming Civil War battle reenactment. 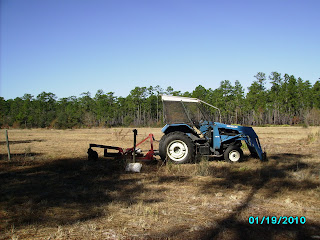 While Gary worked in the field, I explored the small unattended museum and the monument dedicated by The United Daughters of the Confederacy in 1936. 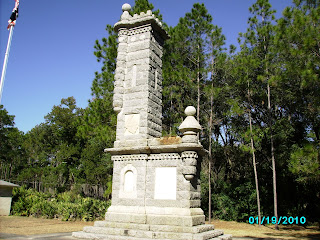 The battlefield monument is flanked by two civil war era artillery pieces.  You can see the museum in the picture below.  Inside the museum are some civil war artifacts, historical interpretation displays and uniforms.  Also a continuous video loop of the history of the Olustee Battlefield. 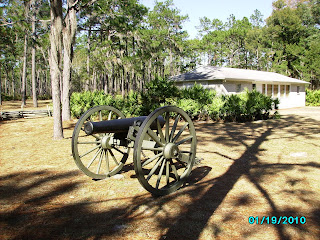 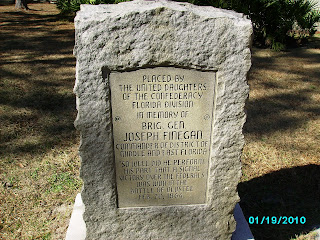 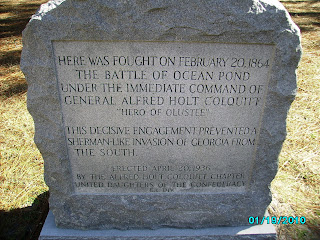 Gary explained that the Florida Park System provides a park ranger to the Olustee Battlefield Park as 1.5 acres including the monument, museum and a ranger house/ workshop are owned by the state.  However, the majority of the land and the battlefield are within Osceola National Forest.  Olustee Battlefield is a day use park and is open to the public at no fee.  The park is administered out of Stephan Foster Folk Culture Center. 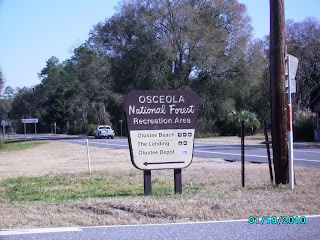 After Gary completed his work, we loaded the tractor onto a flatbed trailer and drove to a truck stop deli across from a renovated train depot.  We walked over, but unfortunately it was closed on Tuesdays. 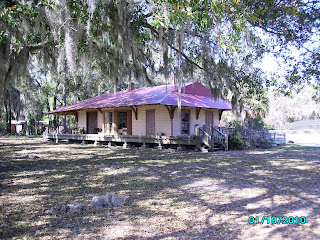 When we got back to Stephan Foster, we came across Joyce at one of the bathhouses just finishing up the laundry.  I called it a day with Gary and rode home with Joyce.  Back home I felt a nap coming on!

Posted by Darren and Joyce Romero at 7:25 AM