January 7th, 2010.  We again awoke to freezing temps and sunny skies.  I had disconnected the water to the rig and let the outside spicket drip.  However, it still froze.  Overnight, I could hear creaking and popping or ice around the bedroom roof a/c unit.   By late morning it had thawed.

Late in the morning, the sun was shining and it was warming up.  The high was expected to be 58!  We took Maggie and Rico for a walk and then cleaned up the utility room in the back of the bathroom building.  Joyce had a pile of boxes left over from the Christmas decorations.  We decided to make a trip to the dumpster at Little Shoals in the John Deere Gator.  In route we checked the hog trap.  The trap was set up in December.  Corn is set out as bait. Since then there have been three hogs captured in the trap.  These pictures were taken last month.  The wild hogs do a lot of damage to the trails and vegetation in the park. 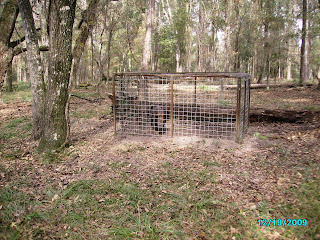 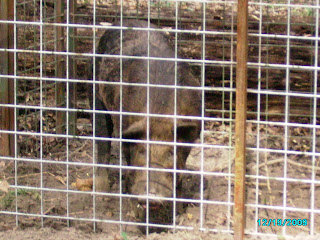 We also traveled through the pasture area, a favorite loading and unloading spot for horses.  The freezing temps had turned the once green pasture area in to brown straw.  We then checked the small observation tower on the Big Shoals Public Lands. 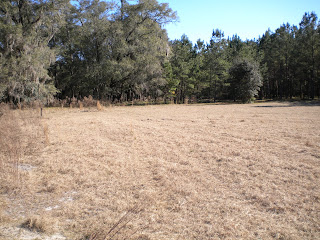 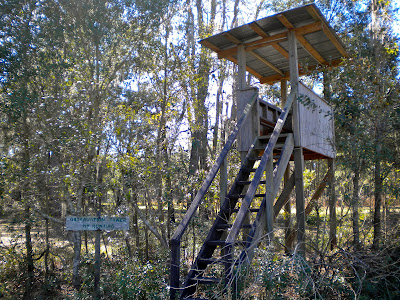 After lunch, Ranger Dylan Shoemaker picked me up and we went to work on repairing the other side of the bridge that we worked on a few days ago.  As you may recall the pedestrian bridge is on the Woodpecker paved pedestrian/ bike trail and had been damaged by a fallen tree.  Our repair is complete except for a 15 inch section of top rail.  We’ll have to come back for that.  We then traveled to Stephen Foster to unload the generator we used.

We were expecting cold rain overnight, so I made some preparations outside and settled in.

Posted by Darren and Joyce Romero at 8:52 AM