Class III Rapids at Big Shoals, Cleaning up after the storm 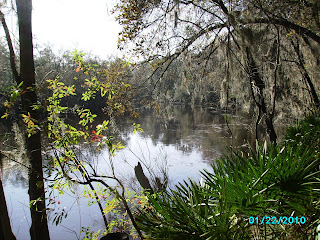 The heavy rains the day before had made a mess of our campsite with fallen leaves and branches.  I got out by 8:00 a.m. and everything was still soaking wet.  I cleaned up around our site, then I took advantage of the water on the car and truck and towel dried both.  Afterwards, I wiped down the sides of the RV.  I still need to tackle the roof pretty soon!   Our concrete slab was still wet, so I rolled up the awning about 2/3 to give the tree filtered sun a chance to dry the slab.

I watched after Maggie and Rico as Joyce began work on the restroom building that was still sweating from the influx of humid air on the cold concrete blocks. I walked down the canoe launch with the leaf blower to clean up.  The water had risen about 1.5 feet from yesterday evening!  Also the river seemed to be moving much faster.  The ranger station reported the water level at 60 ft.  At this level it would make The Big Shoals, just a 1/2 mile down river, a class III white water rapid!  It seemed I could hear the rapids from the canoe launch.  As you may recall, when we kayaked the river a week ago, it was only at 53 feet above mean sea level.

When Joyce was done, I put the dogs in the rig.  She and I then packed up our cleaning supplies in the John Deere Gator and headed down Road 1 on our 4mile journey to Little Shoals park.  We expected to come across mud puddles, however we had not seen so many puddles and gullies before. 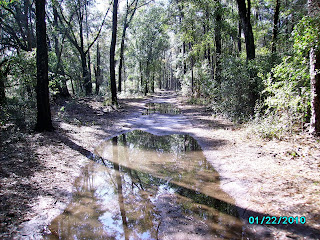 On the return trip we took the paved Woodpecker Trail.  We found sections of this trail under 3-4 inches of water in some low lying spots. 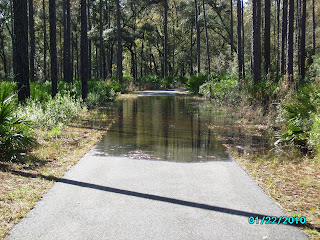 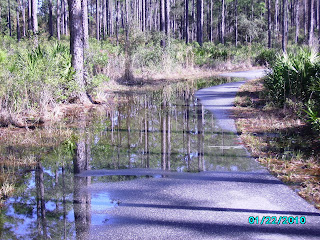 After lunch, I wanted to blow the leaves and sticks off the paved Big Shoals Loop and the Woodpecker trail. However the Gator had been running poorly all morning.  I lifted the bed to expose the engine and investigate.  I thought perhaps it needed new spark plugs as the engine sounded like it was missing.  I removed the two spark plugs and cleaned them.  As I removed the second one, it appeared that it may not have been seated tightly.  I put the plugs back in noting that they didn’t appear to be bad.  The Gator ran smooth after that.  So, I’m assuming that the second plug/ cylinder must have been losing compression as the plug was not tight.

I loaded up the blower into the back of the Gator.  I then blew-off the Big Shoals loop and the Woodpecker Trail.  I wanted to get this done today as lots of folks would be in the park early tomorrow for the Suwannee Bicycle Associaton Ididaride .  I finished with the blower at 4:30 p.m.  Some of the organizers for the Ididaride were in the park putting out route signs.  Joyce spoke with them and got some details related to the event.  I then met up with Ranger Dylan Shoemaker.  We put together some signs to warn Big Shoal hikers that cyclists would be on The Big Shoal trail tomorrow, when usually cyclists are not permitted on that trail.

Dylan and I then hiked the 3 mile round trip hike to The Big Shoals to put up the signs.  We marveled at the sound and speed of the river near the shoals.  The sun was setting and the river was in the shadows so the pictures are not impressive.  No photograph can capture the beauty and the speed of the class III rapids rushing over the submerged rocks. 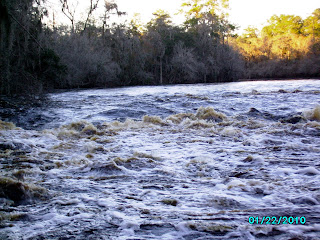 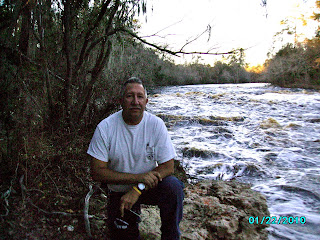 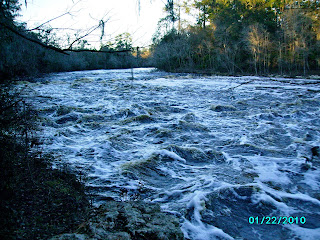 Dylan and I made it back from our hike just as it was getting dark.  I made it inside by 6:30 p.m. tired from a long day!  Heck, I had flashbacks to working for a living!   Tomorrow morning will come early as we will be doing whatever we can in the park to assist the organizers with the Ididaride.

Posted by Darren and Joyce Romero at 5:14 AM