September 30, 2010 Bill Williams River National Wildlife Refuge
A couple days ago we had the opportunity to go out into the refuge. The largest and most remote tract of the refuge is partially accessible off Planet Ranch Road across the highway from the visitor center and offices. However, the general public can only drive about 3 miles on Planet Ranch Road before it’s gated and dead ends. (Refer to one of my earlier posts of Planet Ranch Road.)

The refuge has a wonderful young woman, Nicki Devanny who has been doing an internship with The Student Conservation Association (SCA) at the refuge for the past year.

We see her arrive early in the morning and she usually leaves the compound in one of the 4wd trucks often pulling an ATV. She clearly seemed to be doing a lot of work for the refuge. A few days ago, Joyce and I were talking to Nicki after learning that she would be leaving soon to take a conservation job in Colorado for a non-profit. We asked about what she did with the ATV and she explained that once a month she had to go out into the refuge and collect data from a series of wells. Her final trip would be this week so she invited us to tag along.


Tuesday morning, we left the refuge headquarters at 7:30 and drove to the end of Planet Ranch Road and off-loaded the ATV. After unlocking the gate, we drove through the washed out portion of the road till we came to a dry riverbed which we followed along a steep canyon. Apparently during the spring months the river rises and fills the riverbed. Below is a damaged dingy left at the site where some boys were rescued after trying to go down river during the floods. 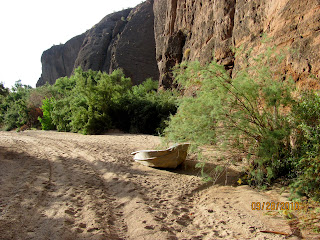 Driving in the sandy riverbed is difficult, even in the ATV. 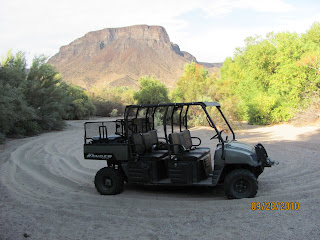 Nicki took us along to several well heads where she collected data to include the ground water levels. 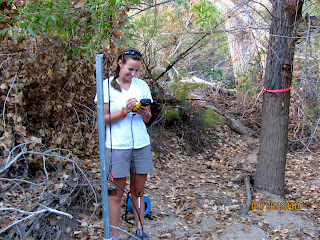 Often we drove out of the open riverbed and into the brush in search of the well heads. Joyce and I were amazed that Nicki was able to find the well heads in the dense brush without a map or GPS. 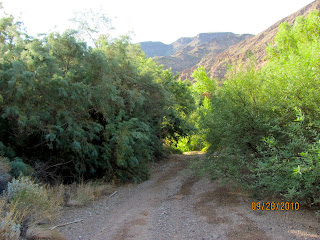 There are beavers in the area and they often dam up portions of the active river basin. Here Nicki and I are accessing the depth and solidity of the bottom to make sure we can get through without getting stuck! 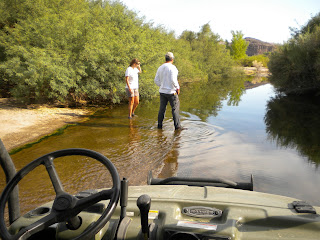 A couple of times, Nicki had to cross streams and crawl over logs to get to the well heads and collect the data. 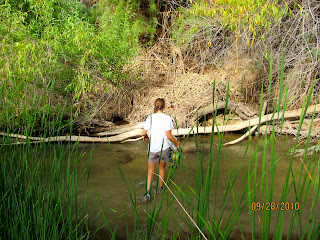 The temps were approaching 100 and expected to be well over 100, so it felt good to get a little wet! 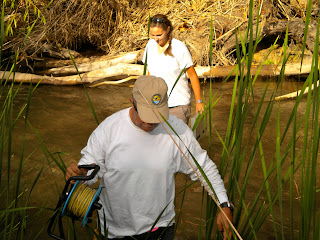 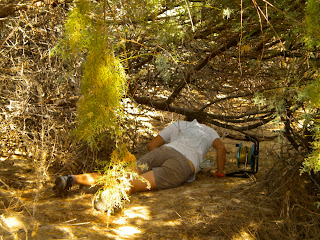 Above Nicki has to crawl under tree branches and brush to get to a well head below. 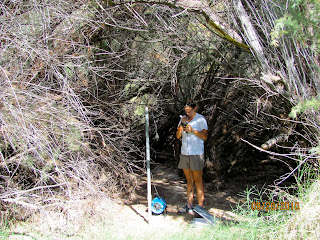 I lost track of how many well heads we visited. But Joyce and I were amazed at the dedication and perserverance of this remarkable young woman. Joyce and I were attired in long pants and long sleeves and I sometimes wore gloves. Nicki scrambled through the sticks and thorny branches without complaint or bother. What's truly amazing to me is that she routinely did these tasks out in the wilderness where there is no cell service...by herself. There is certainly potential for getting stuck in the ATV, bitten by a snake or injured. When asked, she told us she once came across a transient man hiking through the preserve that law enforcement suspected was camping out there. Nicki carried a GPS emergency locator device that could send an e-mail to the office with her location if she got into trouble. Still it would take a couple hours to get out to her!
After collecting the data, Nicki took us out into the desert for a little sight seeing. 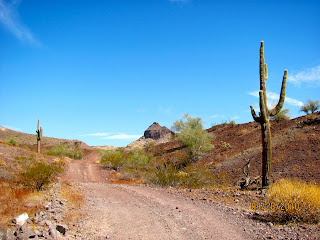 The contrast between the desert and the riparian marsh of the Bill Williams River is remarkable. 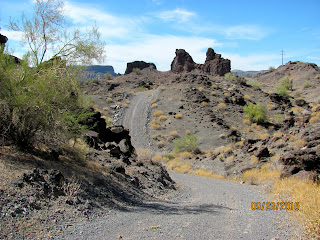 I tried my skills at driving over some of the steep and rocky terrain and Nicki took pictures. 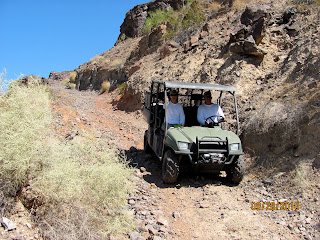 By this point, we are all pretty hot and filthy and it was time to make our way back via the way we came. 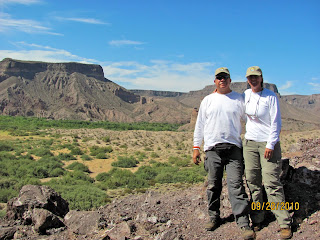 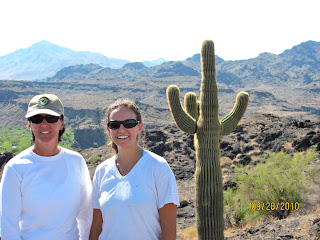 Nicki showed us a great time exploring the refuge and its diverse ecosystems. She's truly a remarkable and dedicated young woman. We are going to miss her when she leaves at the end of the week. I'm sure she will enjoy her new job in Colorado, as she certainly enjoys the great outdoors!
Last night we took Nicki out for dinner in Lake Havasu at a small Thai restaurant. We all had a good time and returned to our rig to watch some of our favorite new season series on TV before calling it a night.
Posted by Darren and Joyce Romero at 10:15 AM