Clearing an ATV Trail in The Refuge

October 19, 2010 Bill Williams River National Wildlife Refuge.
Yesterday I met the Assistant Refuge Manager, Stan Culling bright and early at 0700 for our planned excursion into the refuge to clear and widen one of the ATV Trails.  Although it was overdue, we were doing it so that the power company could get through to move and install power poles.
Joyce also got up early and made us some awesome breakfast burritos. After we consumed the burritos and fixed the parking brake on the Polaris Ranger, we were soon ready to roll. It was an overcast morning and slightly humid, but not Florida Humid!
We drove out Planet Ranch Road parked and then drove the Polaris off the trailer. We continue down the road and past the locked gate for the ATV road which at one time was an extension of Planet Ranch Road. However in the past decade, there have been some flood events in the refuge that wiped out Planet Ranch Road making it unrecognizable and impassable. That resulted in the decision to gate it and block access to the public by vehicle. Only Refuge vehicles/ ATVs are permitted now. 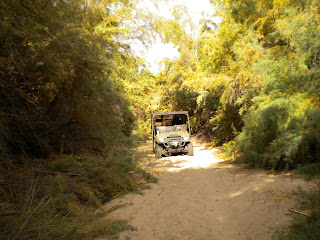 Stan and I brought with us a pole chain saw and regular chain saw. We got to work immediately cutting everything in our path. The sandy soil made it difficult to walk as we carried the saws dressed in heavy chaps. 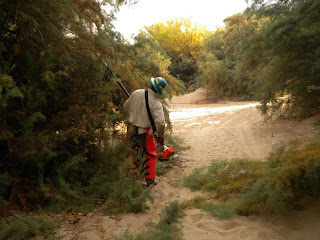 We drank a lot of water as we made our way down the trail. Most of what we cut was the invasive Salt Cedar Trees although we did have to tangle with a few thorny Mesquite Trees as well.
The flood events I previously mentioned filled the underground aquifers and brought the water table up to such a level as to sustain these trees in the low lying areas of what used to be desert landscape. Walk just a few hundred yards out and you are back to a more typical desert.
By noon we were both exhausted with heavy arms from wielding the chain saws. We headed back and unloaded satisfied, that we had cleaned up about two miles of trail.
Posted by Darren and Joyce Romero at 8:00 AM