November 5th, 2010. Bill Williams River National Wildlife Refuge.
I have some catching up to do. Last weekend, my father and his wife Karen came to the refuge and visited us. Joyce and I got permission from the refuge manager to allow them to camp in the empty 3rd volunteer site.
We took my father and Karen on several scenic rides in the area, showing off the best of what we had discovered to include London Bridge in Lake Havasu City. 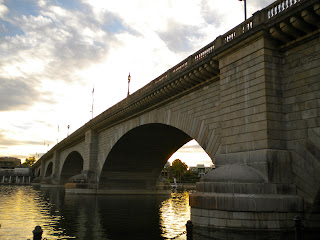 After visiting the bridge we took them to the final Friday Concert in The Park series on the beach not far from the bridge. 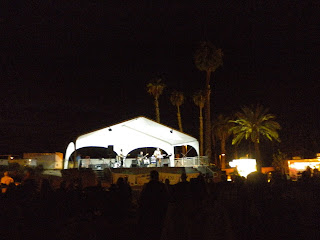 We had a good time listening to the rockabilly group in the cool evening air.
We also took them to see the Parker Dam about 4 miles down the road from our site. The photo below is on the lake side. We also drove across into California. 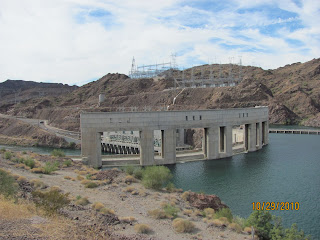 We came across a group of wild burros eating some lush green grass. We got out to take pictures and the burro below started braying and came trotting after us. We all rushed back to the Jeep. After all they are "wild". It turns out this one just wanted something to eat. Unfortunately we didn't have anything to give it. Just as well, as it would have probably stuck its head in the window if it saw a carrot. 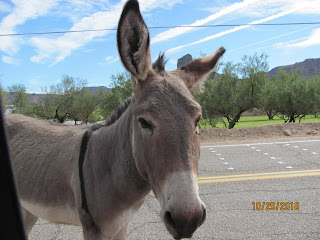 My father and Karen had seen our post: Our Visit to Oatman. They had decided that they also wanted to pay a visit. So this became a good opportunity to take our truck for the long drive to Oatman. It was time to stretch the truck's "legs" as it had been sitting for a while.
Hidden by the public restrooms is a Desert Tortoise enclosure. We found these rather large tortoise chasing each other around in a circle in the enclosure. 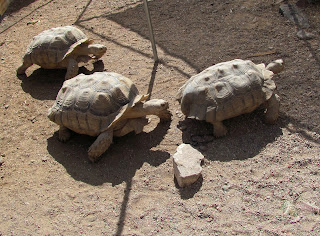 As you may recall, Route 66 passes through Oatman, Arizona. I just like this picture! 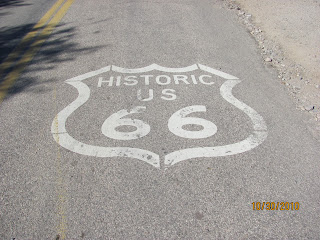 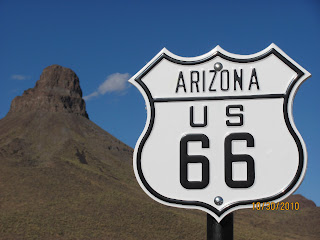 When Route 66 declined in this area, so too did Cool Springs. Route 66 is the most celebrated of the old US highways, and the Cool Springs area is perhaps the most spectacular and unique stretch of the Mother Road to be found anywhere between Chicago and Santa Monica; a “must-see” for the adventuresome automobile enthusiast or historian. 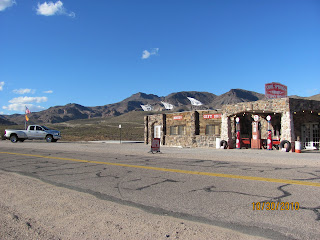 Cool Springs Camp is in the middle of nowhere between Oatman and Kingman on Route 66. The building has been restored and is now basically a novelty shop with snacks. It's a cute stop with lots of memorabilia to see inside. 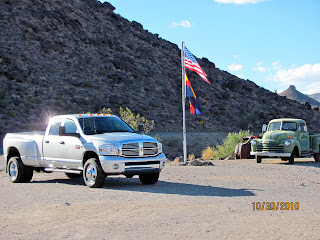 On Halloween (Joyce's Birthday) we all took a ride in the Jeep out to The Desert Bar.
The "Nellie E Saloon" (DESERT BAR) is situated in the Buckskin Mountains, in Parker, Arizona, on land that was an old mining camp. The camp was located on the portion of land that is now the parking lot.
It's about a 5-6 mile drive in the desert on a primitive rough dirt road to get to the bar. There's a few old vehicles, tractors and chassis laying about on the grounds. 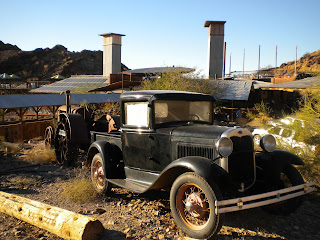 It's nothing fancy but we had a good time listening to the live band. Half the fun was just getting there and back! 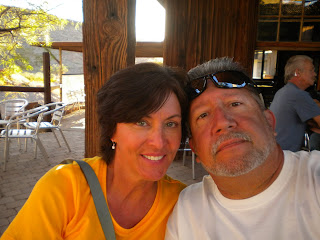 The rest of the week we spent working here at the refuge, landscaping, putting up signs and general maintenance. Yesterday was our day off so we went in to Lake Havasu City. Joyce did some shopping at the mall and I took the Jeep to have the tires rotated. We have nearly 5K mile on the Jeep so far and 12K on the truck!
Posted by Darren and Joyce Romero at 11:23 AM