Kayaking on the Colorado River, Topock Gorge to Castle Rock

November 14, 2010. Bill Williams River National Wildlife Refuge
Yesterday we had a kayaking adventure on the mighty Colorado River. Actually, I guess it's not so mighty where we were!
Stan, the Assistant Refuge Manager here at Bill Williams River National Wildlife Refuge had once suggested that we kayak from Topock Gorge down the river. Not knowing the area, we invited him to come along as our guide! So this past week he made arrangements to borrow a couple of Kayaks for himself and his girlfriend, Nicky. Yesterday, Joyce and I met them at Stan's house and loaded the borrowed Kayaks in our truck. We then dropped off our Jeep at the final destination at Castle Rock just north of Lake Havasu City. Next we all traveled in my truck north on Hwy. 95 and then west on I-40 to a boat launch at exit 1 inside The Havasu National Wildlife Refuge.
Joyce and I pumped up our inflatable Sea Eagle 370 Kayak while Stan and Nicky made their preparations in their individual kayaks. It was windy and the temps were in the lower 60's when we launched. Stan advised the water temperature was about 59 degrees. In the picture below Stan and Nicky are in individual kayacks although it looks like they are in the same boat. 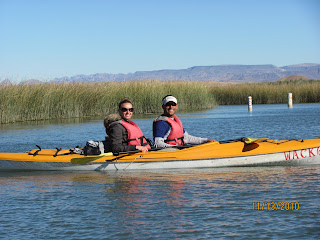 We launched near the California border not far from Needles, California. Within the first mile we passed under a series of bridges some of which, looked like pipe bridges for what we assumed were for propane. 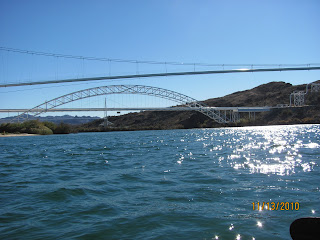 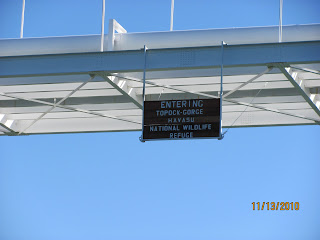 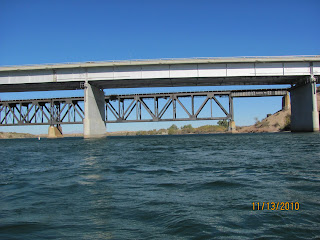 Topock Gorge stretches 20 miles along the lower Colorado, from the Topock Bridge spanning Interstate 40 to the upper end of Lake Havasu. It is part of the Havasu National Wildlife Refuge, created in 1941. The refuge protects 30 river miles and 300 miles of shoreline from Needles, Calif., to Lake Havasu City. 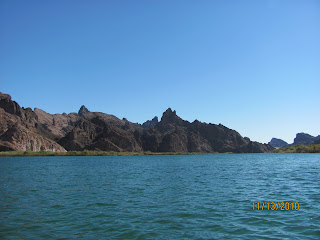 The narrow gorge cradles a writhing, twisted section of river, one cursed by riverboat captains back in the days of big paddle-wheelers, which explains how an especially treacherous bend ended up with the name Devil's Elbow. The cliffs of Topock Gorge, carved into oddly leaning hoodoos, jagged spires and keyhole arches, enhance the drama of the journey.
Floating through Topock Gorge was just beautiful. The water was very clear and we could see the bottom.The gorge protected us somewhat from the wind. We floated at about 5 mph which was slower than I had anticipated. 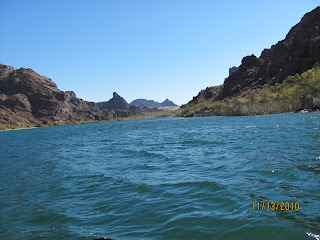 We stopped for a lunch break and an opportunity to stretch our legs on a small beach in the gorge. By now we had all warmed up and shed our outer layers of jackets. 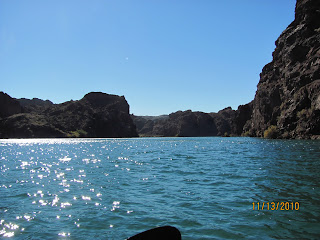 Floating through the gorge was a lot of fun requiring only minor course corrections and paddling.
After about 4 hours we were all getting a bit tired/stiff. We had moved into the more open/wider part of the river and were occasionally buzzed by boats and jet skis. 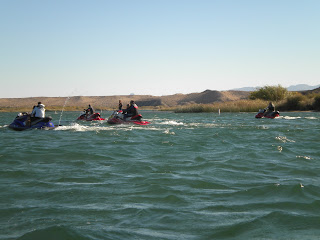 The water was rougher now that it was exposed to the affects of the wind and the motorized vessels. 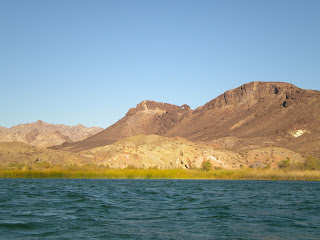 Although we kept moving at about 4- 5 mph, in the open river buffeted by 20 mph winds it was difficult for us to keep the Sea Eagle on a a straight course and often paddling just made it worse. We found ourselves drifting sideways pushed by the wind unless I used the paddle as a rudder to keep us pointed in the right direction. Because our craft is inflatable, the open water and wind pushed us around like a bobber or a rubber ducky! I was not impressed with the performance of our SeaEagle in those conditions. Granted however, that even the traditional style kayaks were feeling the affects of the wind. On the other hand our Sea Eagle is very portable folding down and into a bag about 3ft. x 2.5ft.
After over 5 hours on the river we finally made it to shore at Castle Rock which is also part of The Havasu National Wildlife Refuge. We loaded up the Sea Eagle and as luck would have it WACKO Kayak outfitters, the group that Stan and Nicky had borrowed kayaks from was at Castle Rock picking up a group. So we timed it just right and they loaded up the two kayaks.
We were home by 6:30 and Maggie and Rico were still happy to see us even though we had left them home alone since 8:00 that morning. Our dogs are always something that we have to worry about! We had a wonderful experience, one that we will always remember!
Posted by Darren and Joyce Romero at 12:00 PM