CAP Tour and Training the Interns

December 11, 2010. Bill Williams River NWR
The last few work days have been pretty busy. On Thursday we took an impromptu tour of the Central Arizona Project (CAP) pumping plant with the other volunteers and the interns. The pumping plant pumps out of the cove outside our campsite door. I wrote about the CAP in this September 22 post. 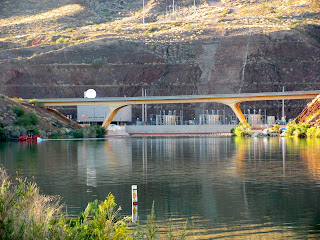 This CAP station pumps 3 acre feet of water a minute out of Lake Havasu and through one of the Buckskin Mountains into an open aqua duct flowing towards Phoenix and Tucson Arizona. 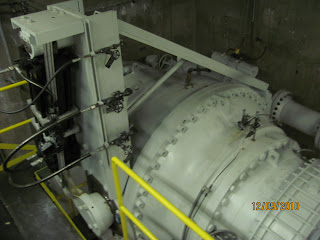 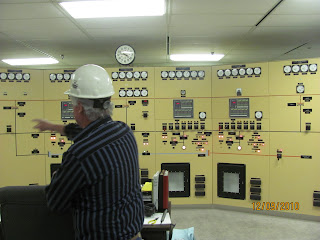 The tour in the 5 story reinforced concrete building was interesting although it was virtually impossible to hear what was being said due to the noise of the pumps. The entire building shakes just a bit from the vibration of the pumps.
Later in the day, the assistant refuge manager asked me to work with Hanna, our newest intern. She will be doing the hydrology field work (checking wells) in the refuge.  However, first she needed help in learning to hitch and unhitch the ATV trailer. After she felt comfortable with that task, I had her practice backing and parking the trailer in a set of cones. She had previously never done any of these tasks in her 22 years so it was a matter of getting her comfortable with the basics. 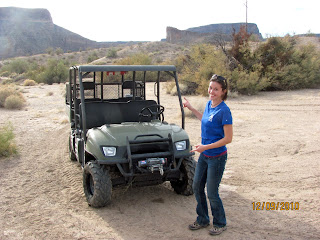 After lunch she trailered the ATV to the end of Planet Ranch Road and we took a ride on the ATV to inspect the Cohen Ranch Field. The route to the field was covered with water from the ever changing/moving shallow Bill Williams River. At the field we discovered that some of the pipes from the solar powered pump had broken. The PVC gets very brittle in the hot sun and can easily break especially if under pressure. The pump is used to drip feed a number of Mesquite trees and other plants planted in the field as part of a restoration project. 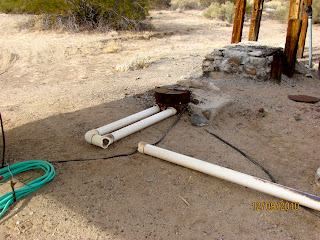 Friday, we worked with both interns, Hanna and Mely putting up some Christmas decorations in the visitor center to include some outdoor lights on the gabled entrance. (I thought I was done with Christmas Lights since we sold our house!) Mely is the intern assigned to do education projects for the public on the refuge.
Afterwards Stan the Assistant Refuge Manager, asked Joyce and I to take the interns out into the refuge, show them around and get them accustomed to the Ranger ATV. (They will receive formal ATV training in the near future).

We left the refuge entering BLM land through the locked gate after a precipitous rocky climb. 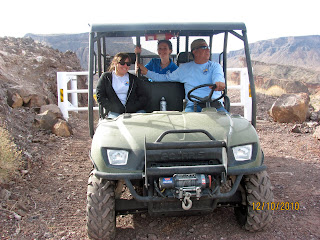 We traveled over some steep and rocky ascents and descents as I gave them the chance to drive. They were somewhat reluctant to drive as perhaps they were outside their comfort level. This was the same area were the previous hydrologist intern, Nicky had taken us a couple of months ago (Exploring The Bill Williams River Refuge.) 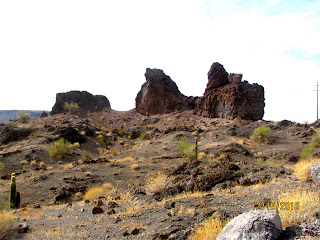 We returned to the refuge staying on flat sandy ground of the washes and riverbeds where they enjoyed learning to operate the ATV. In the picture below you can see the Bill Williams River area with the yellowing Cottonwood Trees and Salt Cedar. 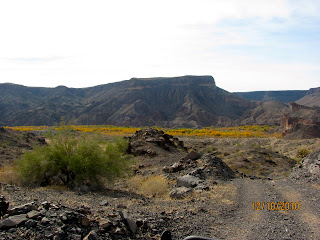 We all made it back safely and both of the interns had a blast. Frankly so did Joyce and I. We've always enjoyed going out into the refuge. I'm sure we will be going back out soon to make repairs to the damaged irrigation.
We only have 3 official work days left before we move on December 20th.
Posted by Darren and Joyce Romero at 9:34 PM