Armadillo problems and working on the rig

This will be a second attempt at this post. Apparently the original post on this date was lost after Google Blogger did some maintenance and a software glitch occurred. That glitch dropped this original post. From Blogger:  Here’s what happened: during scheduled maintenance work Wednesday night, we experienced some data corruption that impacted Blogger’s behavior. Since then, bloggers and readers may have experienced a variety of anomalies including intermittent outages, disappearing posts, and arriving at unintended blogs or error pages. A small subset of Blogger users (we estimate 0.16%) may have encountered additional problems specific to their accounts. Yesterday we returned Blogger to a pre-maintenance state and placed the service in read-only mode while we worked on restoring all content: that’s why you haven’t been able to publish.  We rolled back to a version of Blogger as of Wednesday May 11th, so your posts since then were temporarily removed. Those are the posts that we’re in the progress of restoring.
So stay with me as I try to remember and type what I wrote the first time:
We are still outside Dripping Springs until June 6th when we will return to Naval Air Station Corpus Christi for our Son-In-Laws' Navy "Winging" Ceremony. Shortly after that we will be making a fast exodus North to cooler climates. For now we planning to return to Colorado and possibly travel to Wyoming and Utah over the remaining months before the onset of winter.
In the meantime, we are enjoying the company of our hosts, the owners of the park, Les and Sheri. There are only about 6 rigs that have been here as long or longer than us here in the park. We've become friendly with all of them.
Living in a RV really makes one want to spend more time outside. So much so, that it's easy to get to meet your neighbors. We've sure met a lot of wonderful folks that RV. Weekends around here are interesting as it brings in the "Weekend Rv'ers" and a chance to meet more interesting folks.
Earlier in the week, I had noticed large brown paper wasps entering the exterior vents of or refrigerator. I tore out the nest however days later I discovered the wasps were back at work building another nest.  So, I bought some 1/4" hardwire screen at the Home Depot in Dripping Springs. 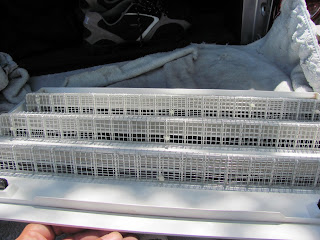 I cut the hardwire and folded it in half, fitting it to the vents. Hopefully this will keep the wasps and other insects out of the vents. Our furnace and water heater vents were already covered with wasp screens.
It has been exceptionally dry. All of Texas is in a drought stage. There is previously installed sod outside the door of our RV. We've been trying to keep it watered. However, whenever we water, the damp ground attracts an Armadillo over night that digs up the sod in search of worms and insects.
Subsequently, Les and I devised a trap using information from the internet. We used 10" wide boards to funnel the armadillo into a live trap. Unfortunately the first attempts didn't work as the armadillo never entered the live trap although there were signs he visited the sod.
Our next attempt was to build a trap door on the right side of the funneling area. In the picture below the trap door had been tripped when the armadillo entered. Apparently he lingered for a while again tearing up the sod before we assumed he just climbed out. Again avoiding the live trap! Les and I will have to work on building a better mouse...er 'dillo trap! I should mention that the 'dillo gets around as he has torn up other freshly watered (damp) areas in the park.

At the time of the original post, we had not had any rain. However, our weather radio was going off the next two days as we had severe storms threatening. From those storms we got about an inch of rain. With the rain and damp ground, attracting the 'dillo to our trap has become impossible. But its time is coming!
The rain was just wonderful and much appreciated. It was enough to wash down the rig and knock the dust down at the same time infusing some green into the landscape.
Posted by Darren and Joyce Romero at 8:02 PM