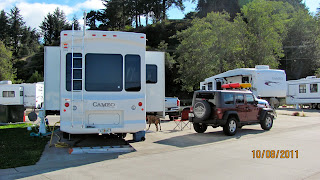 The weather has been miserable the last couple of days. Dealing with the wind, rain and fog makes us all yearn to head south and chase the sun.
We have made a new friend here in the park, Danine. She recently moved to Oregon and this park to begin a career with the local power company. Unfortunately she had to leave her home and husband in Arizona while they wait to sell their house and he searches for work in Oregon, unfortunate hostages to the current state of the economy and housing market.
A couple days ago, Denine made an excellent Lasagna dish for all of us! She's a Full Time RV'er having now lived in her rig since January. However, unlike us, she doesn't have the freedom to move much. We've really enjoyed her company.
This morning the sun came out so we decided to take advantage and head to the shore to explore and take pictures. First the four of us (Paul and Paula, Joyce and I) stopped for lunch and by the time we got on the road, the clouds were beginning to roll back in.

We continued north up the coast to the "World's Smallest Harbor" Depoe Bay.
Depoe Bay is a city in Lincoln County, Oregon, United States, located on U.S. Route 101 next to the Pacific Ocean. The population was 1,174 at the 2000 census, with an unofficial estimated population of 1,355 in 2007. The bay of the same name is a six-acre (24,000 m²) harbor that the city promotes as the world's smallest.
The waves were crashing against the seawall along highway 101. 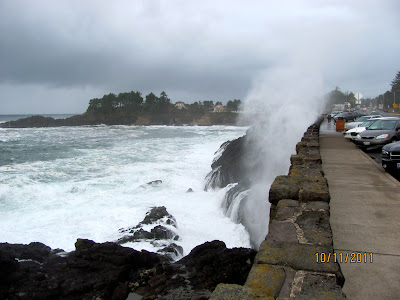 Below is the actual harbor with the entrance under the Highway 101 bridge. There's a small Coast Guard contingent in the harbor. Today the harbor was closed due to rough seas (above), with no boats coming in or out through the narrow passage to the harbor. 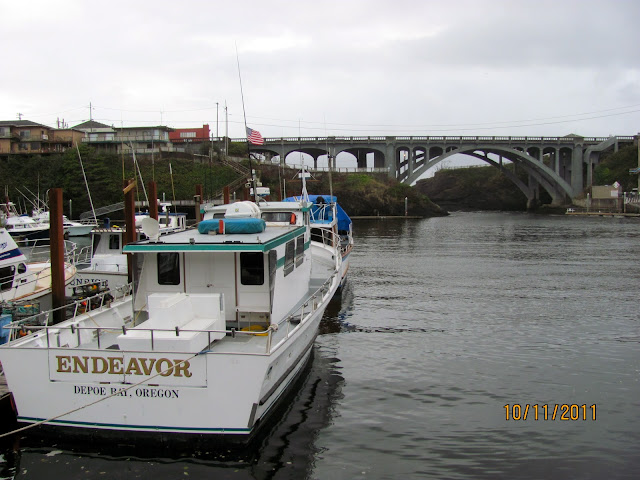 Heading South back towards Newport, we stopped at Cape Foulweather and checked out the views. 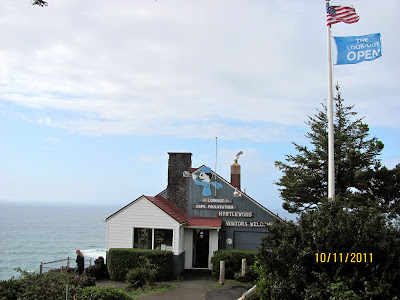 Cape Foulweather was discoverd and named in 1778 by the famous British navigator Captain James Cook. It was at this Point that Captain Cook first sighted the mainland of North America on the Pacific Coast, and one of the sudden storms which greeted his arrival almost put an end to his historical expedition. The fierceness of the storm is reflected by the name he gave this rugged landmark - Cape Foulweather. 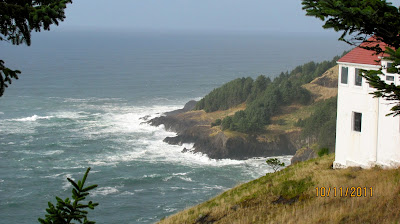 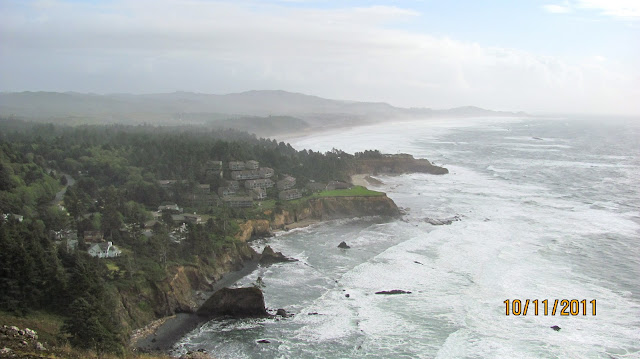 By the time we got home we had been thoroughly soaked at least a couple of times having been caught in sudden rain storms. Oregon and Washington have some amazingly beautiful coast lines, but I could never get used to the weather.

Posted by Darren and Joyce Romero at 8:35 PM

Email ThisBlogThis!Share to TwitterShare to FacebookShare to Pinterest
Labels: Oregon