At the start of our 4th week of volunteering at the park we began with some inclement weather. Two cold fronts pushed through. The fronts produced some rain and windy cold conditions. Joyce and I reported to our volunteer job on a rainy cold morning, ready to drive our assigned back country roads checking for disturbances, off road incursions and damaged barriers. One of the staff members suggested we change our assigned roads for the day due to potential flash floods.  So on their suggestion we were assigned to drive Approved Road (AR) 20 in the park just south of Searchlight Nevada about 60 miles south of Boulder City. Driving south on Highway 95 we encountered snow along the highway as we gained elevation above 3000 ft.

After passing through Searchlight, NV on Highway 95 we turned onto a BLM road, Christmas Tree Pass Road and drove east towards the park boundary.  Hmm.. the fact that the name of the road had the word Pass in it should have been a clue.
As we continued east towards the park boundary, the snow got thicker as we again were above 3000 ft. in elevation.
Before long we found ourselves in an active snow storm and the road was quickly covered in snow. Because we weren't familiar with the road and the snow was making it impossible for us to look for "disturbances" let alone see the road, we decided to turn around and head back and work on some roads at lower elevations.  However, it sure was beautiful to watch it snow in the desert! 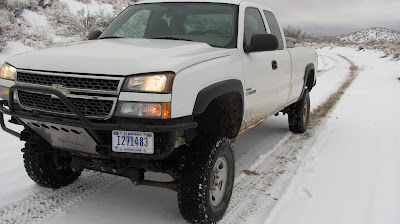 Throughout the rest of the week we gave the park's Chevy 2500 Diesel a workout. 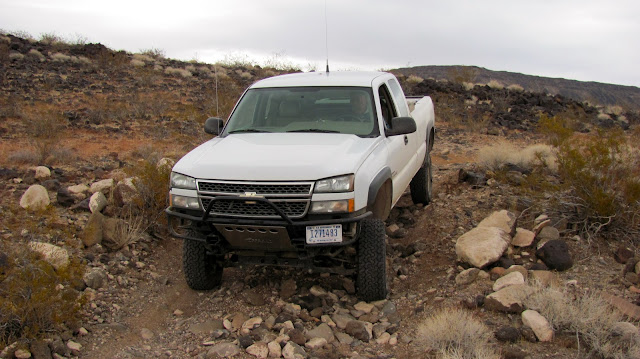 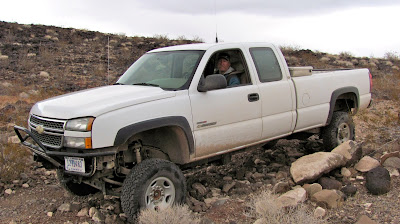 We traveled through sandy washes and over rock debris filled roads some barely wide enough to fit the truck. 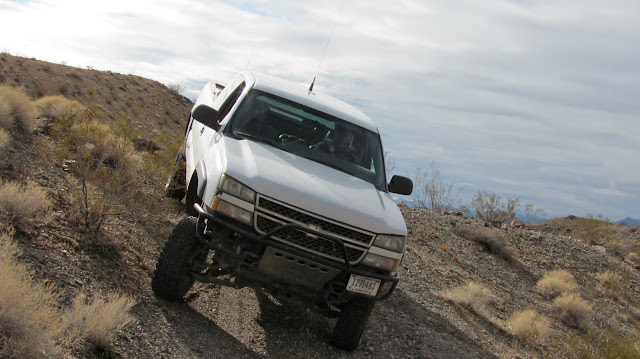 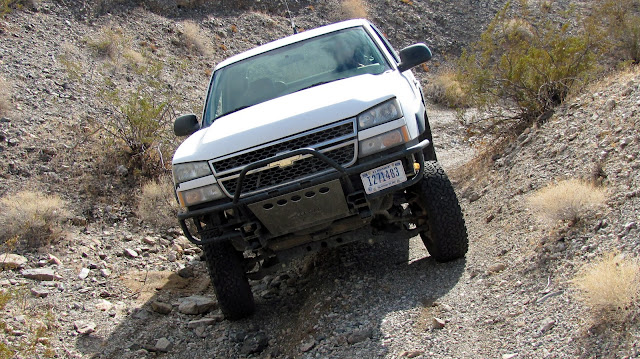 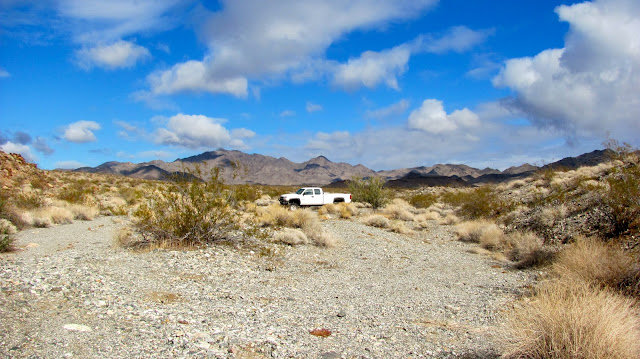 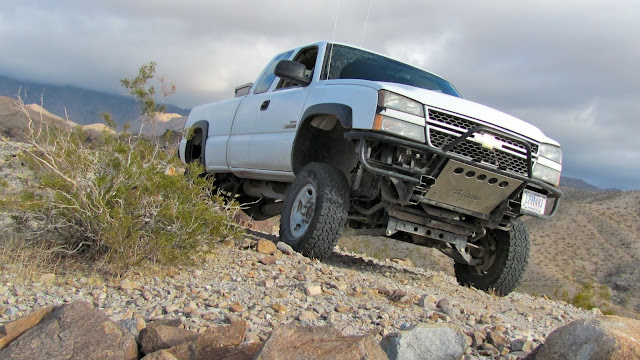 The road below was particularly challenging. Although it's not real evident in the picture, the road AR 70A follows along the top of a ridge line with numerous hill tops. The truck we were driving sits high making it impossible to see the road as we came over the tops of the hills making it challenging and nerve racking as the road drops off on both sides. Often Joyce had to jump out to guide me as I couldn't see the road. Making it worse, the road was littered with eroded holes in some spots.

Driving the back country roads can be fun and challenging but it's also exhausting as we get bounced around for 6-8 hrs. each day often crawling along on rocks at less than 10 mph. On our final day of our rotation, we were assigned a road named Detrital Wash well out in the back country on the Arizona side of the park. Well, for sure it was in a wash area  and the road itself was washed away. Without the GPS, Joyce and I wouldn't have been able to determine where the road was supposed to be. The sand was deep and eroded and we eventually had to turn around and just drive out the way we came in for fear of getting stuck in the sand out in the middle of nowhere.

Posted by Darren and Joyce Romero at 4:15 PM