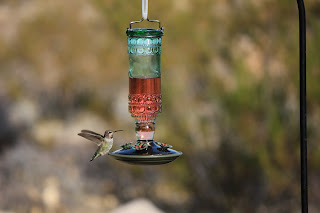 \
Inside the park from the Boulder City entrance and just before the fee booths at Lake Mead Recreation Area is a parking area for the Historic Railroad Tunnel Trail head.  It's a hike/ bike trail that follows part of the route that the railroads used to build the Hoover Dam.
It's a gravel/ dirt trail that goes through 5 tunnels. It's only 3.7 miles from the trailhead to the dam parking lot.
The best thing about the trail is the beautiful views it provides of Lake Mead.

We enjoyed our little excursion to the Historic Railroad Tunnel Trail. It seems to be a very popular stop for the locals and it sees a lot of use. It's worth the stop if you have the time and need a scenic hike or a short bike ride.

Posted by Darren and Joyce Romero at 6:05 PM