One day last week we took Paul and Paula out with us to inspect one of our assigned roads as part of our volunteer assignment at Lake Mead N.R.A. They are able to go with us as they are also volunteers, however, they work for the visitor center.
We took advantage of the fact that we would be driving past The Bowl of Fire (B.O.F.) off Calville Wash Road (A.R. 94) and got in a short hike to the B.O.F.
Like most of the trails in the park, the trail to B.O.F. was poorly marked and started off in a wash. We could see the Bowl in the distance and kinda just made our own way following the infrequent tracks of others who came before us.

Once in or at The Bowl of Fire we had to find our way back. I climbed up to the top of some rocks to get a better vantage point and look for a trail back.
Although I wasn't able to spot a trail from on top of the rocks, we did make it back to the truck without incident!

Yesterday, Paul and I left our lovely wives at home and decided to tackle a more challenging hike to the top of Fortification Hill on the Arizona side of the park. Previously, Paul had taken advantage of his duties in the visitor center to scour over their resource documents on hikes in the park. Unfortunately the information was limited and once again we would be forced to turn to the internet for directions.
Ultimately we got to the trail head off Kingman Wash and started off the hike trying to find our own way. We started up the wash below but later realized, that we should have been on the ridgeline to the right of the wash.
Eventually, we found the ridge after the foot prints we were following in the wash disappeared! Once on the ridge the serious climbing began as we would eventually summit at 3700 ft. above sea level. 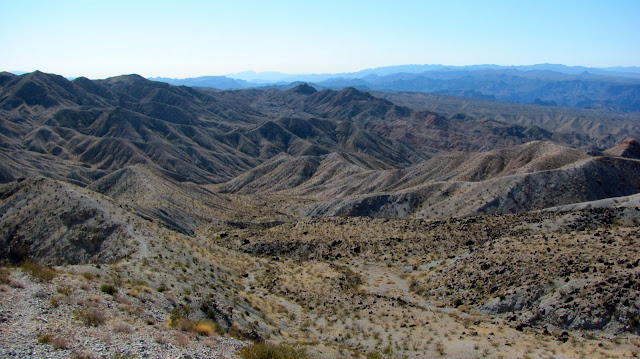 I'm usually a pretty strong climber, but I had to stop a few times on the way up to catch my breath. 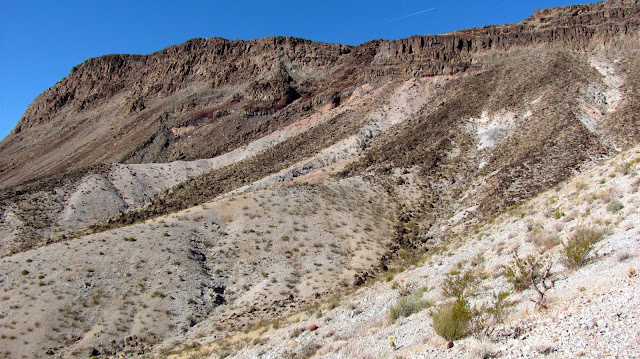 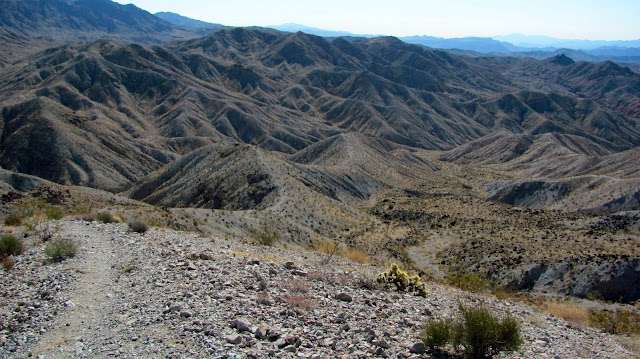 As we approached the saddle, we came across a group of hikers from a local hiking club descending. It's good that we did, as we could see roughly where to go for the ascent up the rocks.
After Paul and I ascended the steep, slippery rocky saddle we caught our breath and prepared to assault the rock scramble. 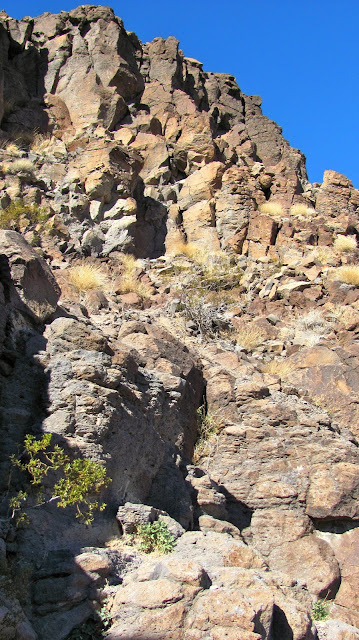 From our internet research, we had learned that in November of 2008 a hiker fell to his death at this portion of the climb. A hiking club left this memorial at the site.
Although I was forced to overcome my fear of heights, Paul and I both made it over the rock scaling ignoring the precipitous drop-off. Once on top, Paul pointed to my Jeep in the distance below. 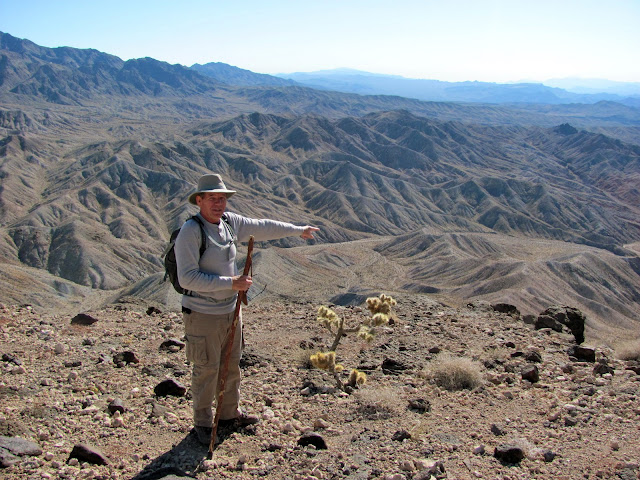 From the top of Fortification Hill we still had another .6 miles to travel to the summit. 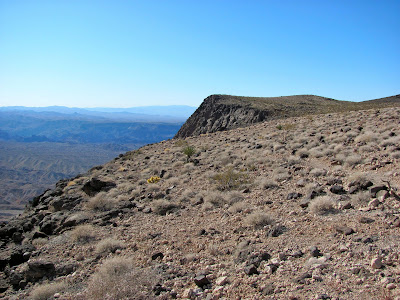 After reaching the summit, we signed our names in the book stashed in an ammo can at the top and enjoyed the views of Lake Mead and Hoover Dam. 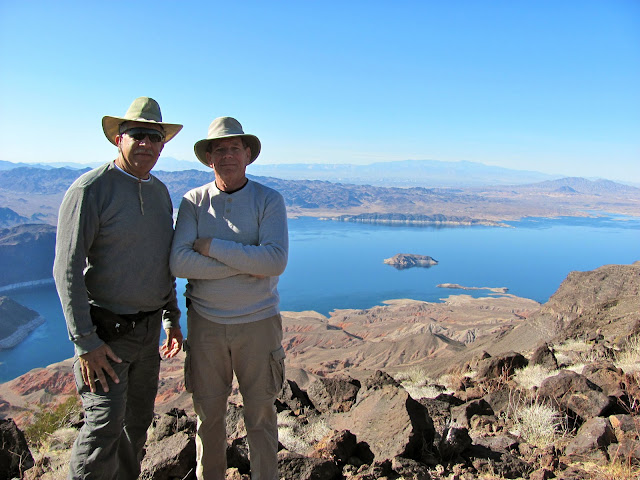 After eating lunch on the summit it was time to start back down with the knowledge that we would have to scramble back down the rock scaling portion. We hiked back the .6 miles to the scramble/ scaling area and safely made it down without incident. I felt relieved that it was literally all down hill from there.
It was a long steep hike down. It took us two and a half hours to summit and two hours to get down. It's amazing that neither of us fell on the way up or down as it was very rocky and slippery on the loose gravel. After about 7 miles round trip, we made it back to the Jeep no worse for the wear after having enjoyed a challenging hike!

Posted by Darren and Joyce Romero at 10:36 PM