Today was a travel day! After spending a few weeks in Mesa, AZ and Carriage Manor Resort, it was finally time to hitch up and move on.

Some of you may have been wondering why we would spend nearly 3 weeks in Mesa, AZ enduring 90 plus temps. Well the plan was to hook up with my father and Karen near the 1st of June. Then we would travel to Colorado together pulling our fifth wheels. My sister and her family live in Colorado so we plan to pay them a visit. Our combined trip and vacation should take us into or close to July.

We got on the road shortly after 10:00 headed south. It was in the mid 80's when we pulled out and quickly warmed to the upper 90's. I followed my father and Karen's rig and I was followed by Joyce in her car. Traveling caravan style always has some issues. We each have two-way radios to communicate but the range is limited to probably less than a mile. Also I like to pull no faster than 60 mph and my father likes to go a bit faster. I'm sure we will get all the bugs worked out.

Before arriving at our destination, we decided to stop at a truck stop that had CAT Scales to weigh our rigs. I'll post more about the weights in my next post. Before long we were approaching the entrance to Davis Monthan A.F.B. 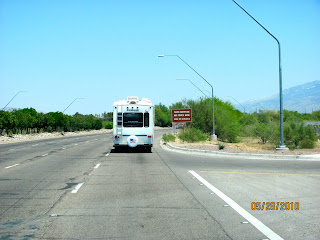 My father is retired from the United States Air Force so he has military base privileges to include the use of the FAM Camps which are RV campgrounds on military bases. We are able to tag along as his guests. So the first stop was at the visitor center so that Joyce and I could get passes for the base.
Then it was off to the FAM Camp to get registered. (I took the pictures below in the evening.) As we got registered and set up the temperatures were close to 100 degrees! Our site is beautiful. We got an end site with a few trees, cactus and beautiful landscaping.  Needless to say I wasn't in the mood to take pictures at that time. Below is the view out our door. 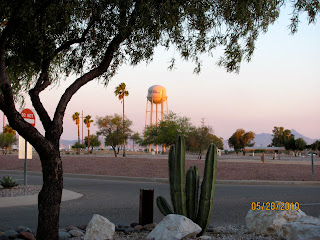 My father and Karen also got an end site across the road from ours. A view of our site from the side. 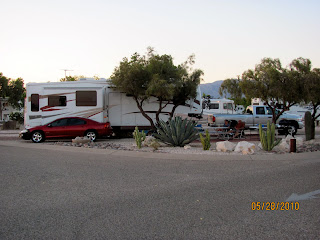 A front view of our site. We set up a small outdoor kitchen and my father grilled chicken and pork chops for dinner. As the sun went down it began to cool off and it was very comfortable. 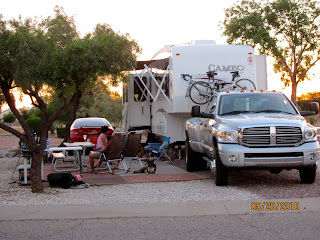 The view down the row. You can see the tails of hundreds if not thousands of surplus depot military planes that are stored here at Davis Monthan A.F.B.
The 309th Aerospace Maintenance and Regeneration Group (309 AMARG) is a one-of-a-kind specialized facility within the Air Force Materiel Command structure. 309 AMARG provides critical aerospace maintenance and regeneration capabilities for Joint and Allied/Coalition warfighters in support of global operations and agile combat support for a wide range of military operations. 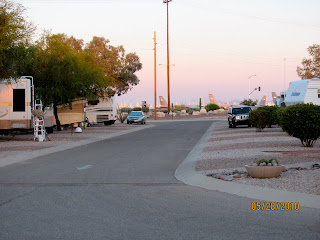 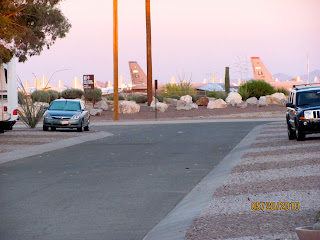 Immediately after World War II, the Army's San Antonio Air Technical Service Command established a storage facility for B-29 and C-47 aircraft at Davis-Monthan AFB. Today, this facility is the 309th Aerospace Maintenance and Regeneration Group (309 AMARG), which has grown to include more than 4,400 aircraft and 13 aerospace vehicles from the Air Force, Navy-Marine Corps, Army, Coast Guard, and several federal agencies including NASA 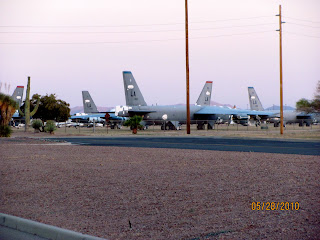 Davis Monthan A.F.B. is also home of the 355th Fighter Wing flying the A-10 Wart Hogs.
The 355th Operations Group consists of six squadrons and over 450 personnel employing 75 A/OA-10 aircraft and an AN/TPS-75 radar system. It provides war-fighters with forces for close air support (CAS), air interdiction (AI), forward air control (FAC), combat search and rescue (CSAR), ground based tactical air control, and airbase operations. It also conducts all formal course directed aircraft initial qualification/requalification training.
This is a really nice campground. The facilities are very clean and modern. Our site and the majority of the sites are gravel with a door side slab and picnic table. Each site has 30/50 amps, water, sewer and WIFI. We paid $20 for each night and plan to spend at least 3 nights maybe 4.
Posted by Darren and Joyce Romero at 8:16 AM