Travel Day to Williams, AZ "Gateway to the Grand Canyon"

August 3, 2010.
It was a cool morning and we made our final preparations before getting hitched up and pulling out. I had hoped to be on the road by 8:00, but we weren't on the way till 9:00. Our delay was in part because I was trying not to disturb our neighbors early in the morning. Our immediate neighbor usually was gone by 7:00 but today they slept in. Moreover, their truck was positioned to make pulling out of my tight space difficult. As I was making ready and beginning to hitch up another neighbor came over to talk. I enjoy the friendliness of the folks we meet in the campgrounds, but I don't like being bothered when I'm hitching or unhitching. Conversation can break the routine and cause me to miss something. Anyway, all went well. 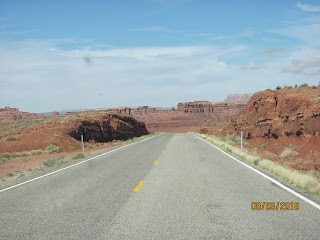 I was expecting a nice smooth ride. Or should I say I was hoping for a nice smooth ride for the 300 miles to Williams Az. By now you know I don't like to travel much over 200 miles a day and prefer 150 or so. However, there wasn't much in the way of campgrounds between Monticello, Utah and Williams, AZ. so the plan was to press on! 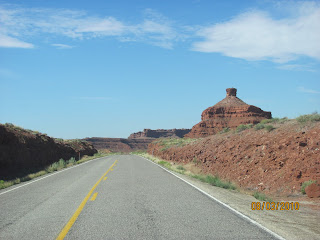 But instead the ride was full of beautiful scenery but also twisting turning steep canyons and this rather unusual bridge (in the desert). 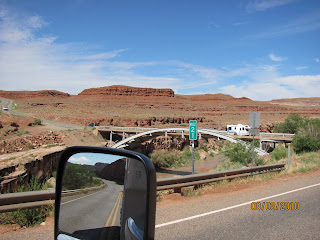 We were traveling near Monument Valley on Navaho Reservation property. 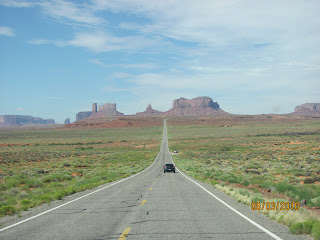 There wasn't much traffic on Hwy 191 and at times it seemed like we were the only ones out in the middle of nowhere. But the scenery more than made up for the desolation. 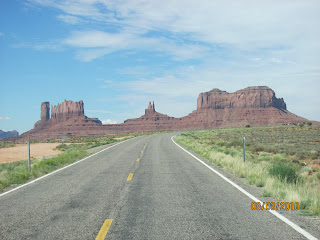 A few pictures from Joyce's perspective! As you know, Joyce follows the dogs and I in her Jeep. 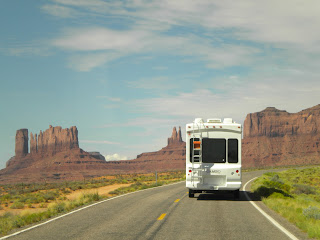 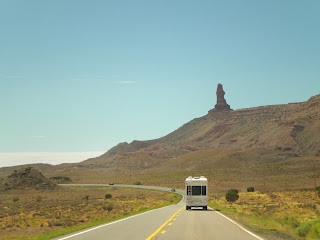 Every few miles we would pass a little stand on the side of the road (trading posts), were the Navaho people would be selling trinkets and jewelry. 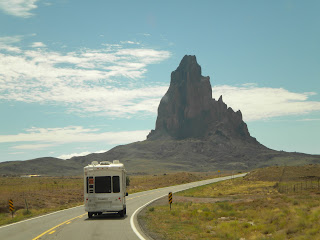 We stopped in Tuba City for a break at a local cafe that looked to have once been a McDonalds' truck stop. It turned out it was now a Native American cafe. However, it was filthy and expensive. So we didn't eat and just snacked on crackers while we let Maggie and Rico take a break. I also emptied the two 5 gallon cans of diesel I carry into my truck. 300 miles is near the maximum range which is apx. 350 while towing so, I like to have that reserve. As you know I'm not fond of pulling into fuel stations with my rig, so I avoid it whenever possible.
As we neared Flagstaff, Az. we encountered a heavy rainstorm but thankfully we drove out of it and on to I-40 for the last leg. 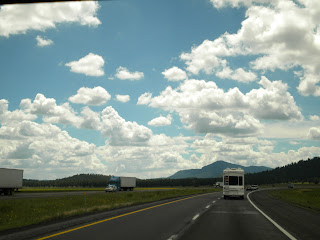 We made it safely to The Canyon Motel RV Park in Williams, Az. "The Gateway to The Grand Canyon". We traveled over 300 miles in 6.5 hrs. We will be staying for a month. Now I gotta say, Joyce picked this one as she didn't like the park I picked in Utah!
I was impressed to see that the Jeep got over 23 mpg during this trip. Which is good considering the local gas stations here in Williams are at $2.85 for a gallon of regular gas. I think the good gas mileage is due impart to the fact that we drive @ 60 mph or less. I think my truck and rig got over 10 mpg, but I'll have to fill the tank and work the numbers.
After arriving we were famished and decided to go into Williams, Az. a mile away for dinner. Dinner was good and we walked around the Historic 66 downtown district. It's a very small very touristy town, but so far we like it!

Williams, Arizona would go down in history as being the last town to have its section of Route 66 bypassed. The original plan was to have the last section of the famous highway bypassed somewhere in Texas, but lawsuits that had been filed kept the last section of Interstate 40 from being built around Williams. After settlements called for the state to build three exits for the town, the suits were dropped and I-40 was built. In 1984, Interstate 40 was opened around the town and newspapers the next day reported the essential end of the famous US 66. The following year, Route 66 was decommissioned. 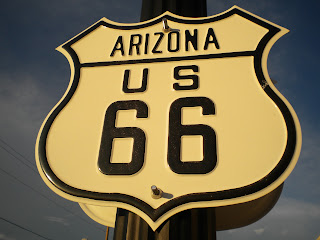 My next post will contain pictures and information on the campground. We plan to stay here for at least a month, so stay tuned!
Posted by Darren and Joyce Romero at 9:27 PM