August 30, 2010, Parker, Az
Yesterday was very windy and we were under a "wind advisory" as I made preparations to depart The Canyon Motel and RV Park in Williams AZ. I aired up all the tires on my truck and the fifth wheel. I then installed the transmitters on the valve stems of the trailer for the TST Tire Pressure and Temperature Monitoring System. However, I discovered the right front tire transmitter wasn't providing data so I replaced it with one of my two spares. They are supposed to last for 5 years, and I've had the system just over a year! While airing the tires I noticed a large piece of wire or perhaps a large staple stuck in the tread of the right rear tire on the fifth wheel trailer. I pulled it out and checked with soap and bubbles for a leak but didn't find one...whew!

View Larger Map
We were hitched and ready to go about 9:45 and said goodbyes to our neighbors, Dave and Judy. We hope to see them again down the road as they don't live too far from our destination: Lake Havasu/ Parker, Az. It was very cool this morning with a low in the 40's but it quickly warmed up. We still had a pretty stiff wind out of the Southwest which stayed with us along the 200 mile route. However, we made pretty good time on I-40 arriving in Kingman, AZ in time for a quick lunch. 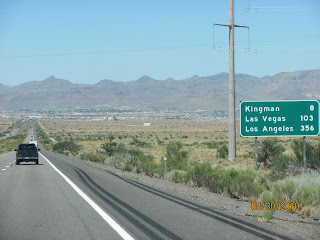 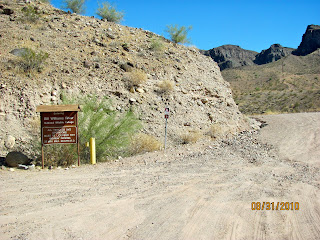 This road sure looked rough! I sent Joyce ahead in the jeep to find the visitor center as I creeped along with the rig. I got just over a half mile up the road before Joyce radioed back that she was turning around as the road was getting worse. This couldn't be the right road! I stopped the rig here and backed up in 4wd low and with Joyce's help found a slightly wider spot to slowly jack-knife the rig to get it turned around while avoiding dropping it over the cliff! I took these pictures the day after as I didn't have enough composure to take the pictures at the time! 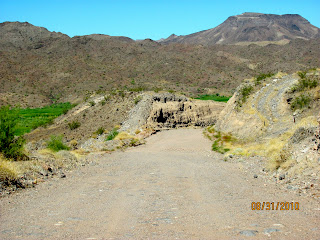 We finally got turned around and headed back towards Hwy. 95.  Unfortunately I didn't have the phone number to the refuge handy because if I did I could have avoided this near disaster. I dug my laptop out of the rig and found the phone number. I called and learned that the visitor center and our destination were actually about a half mile down the highway to the left in this picture on Lake Havasu. 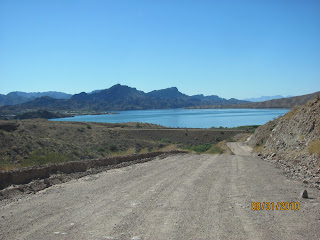 Minutes later we arrived and were greeted by some of the staff that we would be working with. They helped to get us parked and then allowed us to get set up ...which took me all evening. It was about 95 degrees when we arrived.  Again, I failed to take pictures till the next morning. A nice plus is the sunscreen drapes that block the afternoon sun as well as the sunscreen roof. As you can see I have the covers on the Jeep and our truck. 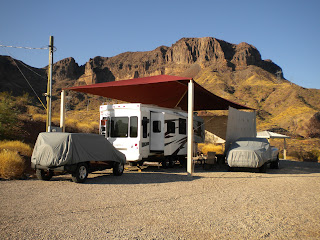 We have neighbors that we have yet to meet. They are here till the end of September until another couple arrives. 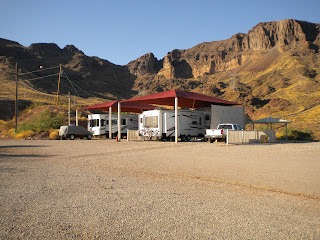 Our covered table at the front of our rig has a great view of the lake and a campfire site. 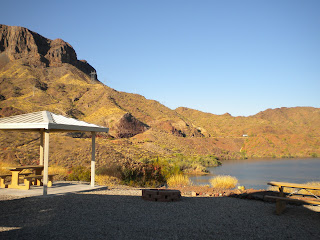 View of the visitor center across the parking lot. 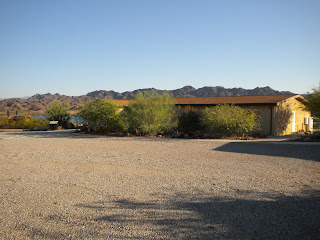 And finally a picture taken the evening we arrived just after sunset over Lake Havasu. 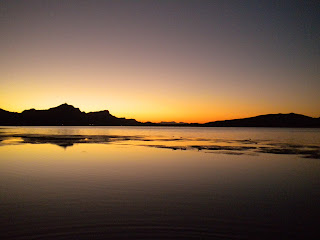 Tomorrow we need to get up early and meet our new boss for a run down on some of our duties. I'm sure it will be a warm day!
Posted by Darren and Joyce Romero at 9:24 PM