Okay, so I promised some photos of the Going To The Sun Road, the only East-West or vice versa road that traverses across Glacier N.P. While crossing Glacier N. P. it goes over Logan Pass and the Continental Divide. Going To The Sun Road travels 52 miles across the park.
One of the most amazing highlights of Glacier National Park is a drive on the Going-to-the-Sun Road. This engineering marvel spans 50 miles through the park's wild interior, winding around mountainsides and treating visitors to some of the best sights in northwest Montana.

Now I had done some research and read many blogs regarding the Going To The Sun Road and many lamented about how narrow and dangerous the road is. Some suggested only traveling from the East to the West so that you are on the mountain side of the road as opposed to the drop off side. 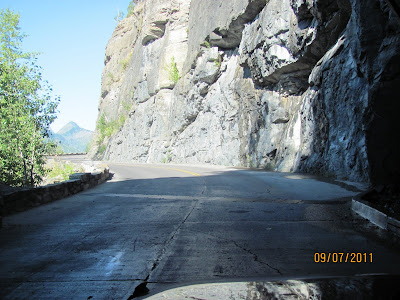 Yea it is narrow in some spots and vehicles over 21 feet and over 8 ft. wide are not permitted on the road when it starts climbing over the pass. However, those dimensions are smaller than most modern dually pick-ups and we saw just a few on the road. Allegedly the fines are substantial if an incident arises and your vehicle is outside of the restricted dimensions. 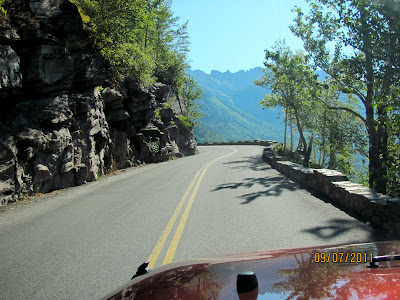 Although narrow and curvy the road was not as bad or scary as I had expected at all. In fact we've been over more dangerous roads and passes in Colorado. 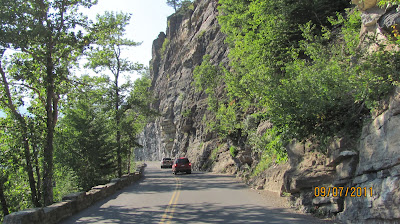 The road is one of the most difficult roads in North America to snowplow in the spring. Up to 80 feet (24 m) of snow can lie on top of Logan Pass, and more just east of the pass where the deepest snowfield has long been referred to as Big Drift. The road takes about ten weeks to plow, even with equipment that can move 4000 tons of snow in an hour. The snowplow crew can clear as little as 500 feet (150 m) of the road per day. On the east side of the continental divide, there are few guardrails due to heavy snows and the resultant late winter avalanches that have repeatedly destroyed every protective barrier ever constructed. The road is generally open from early June to mid October, with its latest ever opening on 13 July (in 2011).
Going To The Sun Road is in the 5th year of a 10 year reconstruction project. The road is frequently damaged by snow and avalanches. It was originally opened in 1932.

This road is shown in the opening credits of the 1980 film The Shining, as Jack Torrance's Volkswagen glides past Saint Mary Lake and up the road, underneath a small tunnel and onward, presumably going to the Overlook Hotel for his job interview as a caretaker. In 1982, leftover aerial shots from this footage were used for the closing moments of the original cut of the film Blade Runner.
This road is also seen briefly in the film Forrest Gump. As Forrest reminisces with Jenny, he remembers running across the U.S. and remarks, "Like that mountain lake. It was so clear, Jenny. 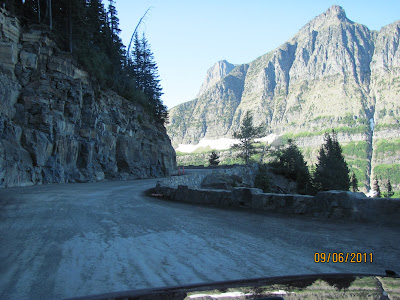 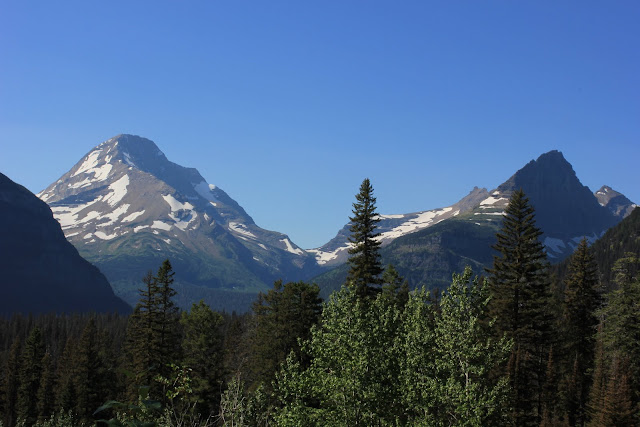 We drove through the East side towards St. Mary where we left the park and got on Highway 89 heading north. We then traveled west again entering the park at Many Glacier. 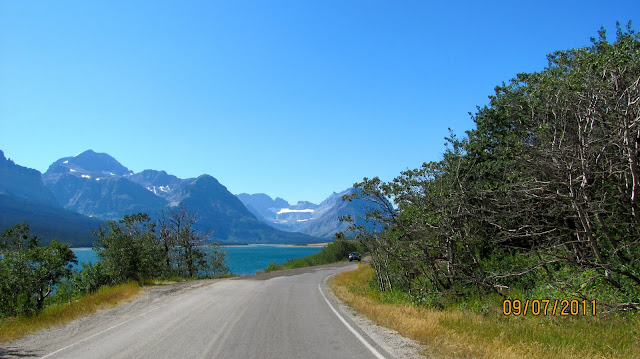 At the end of the road in Many Glacier is a small restaurant. Behind the restaurant is a large mountain. We could just make out four brown specks about a mile away on the side of the mountain. Closer examination revealed a mother Grizzly and two cubs and a second mature Grizzly. Park Service employees soon emerged in the parking lot with a large spotting scope that confirmed that what we were seeing were Grizzlies apparently feeding on berries. I took several photos that after magnification are very grainy.

We were glad we had the opportunity to drive over to the East side of Glacier N. P. and to visit Many Glacier. Although we did finally get to see some Grizzlies, we were glad and yet disappointed that they were so far away!
In our opinion the West side of Glacier is more appealing but, it's all very beautiful.
Round trip we drove 160 miles that day and were gone over 8 hours. I think it took 2.5 hours to drive the 52 miles one way across the park and Logan Pass to St. Mary.

Posted by Darren and Joyce Romero at 10:48 PM