We did some research on the hikes in Glacier National Park as we were looking for something with some moderate distance, low traffic and great views. Our research lead us to The Highline Trail which begins outside of the visitor center at Logan Pass on Road To The Sun. The day of our hike was the day after Labor Day and some of the park amenities were now closed or shutting down to include the park shuttles. So we drove to the top of the pass in the Jeep taking some beautiful pictures on the Road To The Sun however, I'll save those pictures for a later blog as this blog will be bloated enough with pics!
We got an early start leaving our RV park with Paul and Paula at 8:30 a.m.  However, it took us almost two hours to get to the pass so we started our hike around 10:30.


About a quarter mile from the start, the trail began to narrow and we had to traverse some narrow ledges with steep drop offs down to the Road To The Sun.


The trail follows the Garden Wall which seems to have gotten it's name from the lush vegetation and flowers that seem to grow out of the rock.

One of Glacier National Parks more prominent features, the Garden Wall, is an arête separating the Lake McDonald Valley from the Many Glacier Valley.

An arête (French for fish-bone) forms when two glaciers work on opposite sides of the same wall, leaving a long narrow ridge. 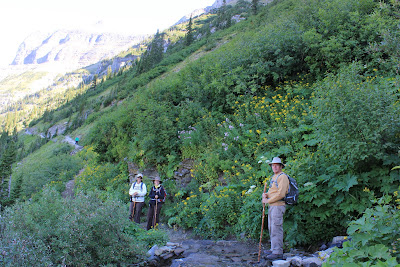 The first half of the hike was in the shade of the mountain making it nice and cool at about 50 degrees at the start. However, as time marched on we all shed some layers particularly when the hike entered the sunny slopes. 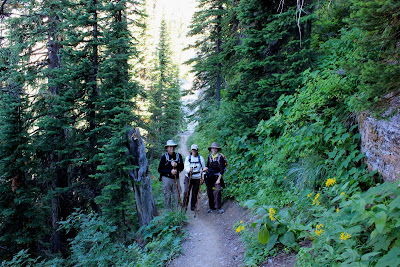 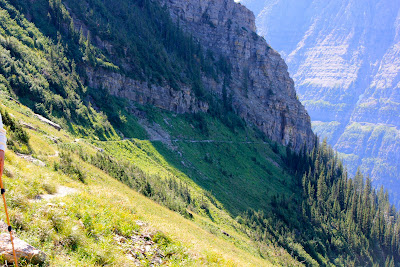 We came across this Ram near the trail and I climbed some rocks for a better look and photos. Fearful that the bold Ram would attack, the girls fled down the trail (with our bear spray...LOL). We had seen some other Rams further up the mountain but none this close. 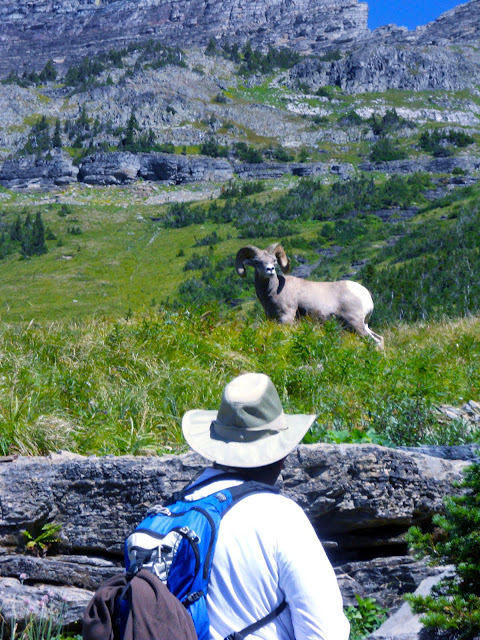 Rocky Mountain bighorns inhabit the mountains from Canada south to New Mexico. They are relatives of goats, and have balance-aiding split hooves and rough hoof bottoms for natural grip. These attributes, along with keen vision, help them move easily about rocky, rugged mountain terrain.
Wild sheep live in social groups, but rams and ewes typically meet only to mate. Rams live in bachelor groups and females live in herds with other females and their young rams. When fall mating arrives, rams gather in larger groups and ram fighting escalates. Usually only stronger, older rams (with bigger horns) are able to mate. 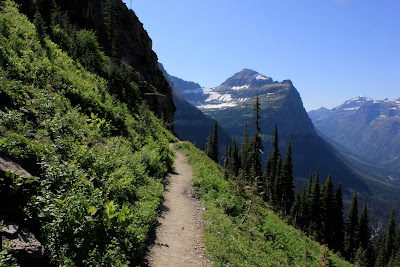 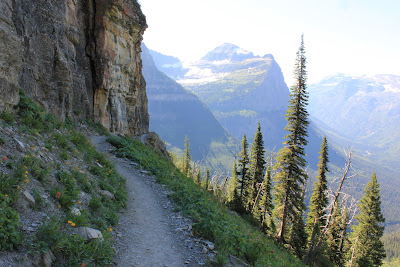 Joyce and Paula were getting tired and were ready to turn around. So they stopped to rest as Paul and I continued on for another 1/4 mile or so determined to get to a snow bank on the side of Haystack Butte.
Heading back we had to again walk along the Garden Wall cliff ledge. It looked like we were on top of the world. Again not for the faint of heart! 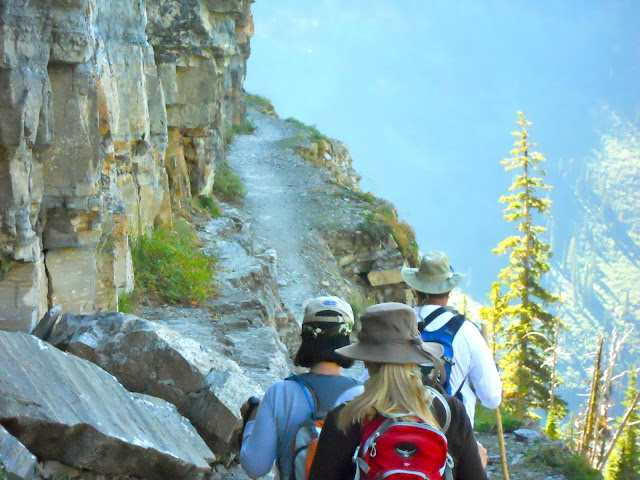 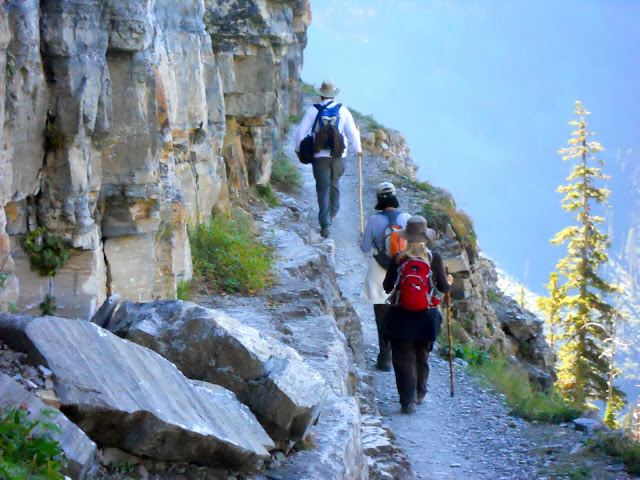 Portions of the cliff ledge have a garden hose covered steel cable attached to the cliff wall for those needing some support.

Before getting back to the parking lot we came across some more sheep to include this large Ram that poked his head out of the forest.
We had walked at least 7 miles on this hike and enjoyed every step. We all agreed this had been one of the most beautiful hikes any of us had done. Pictures just don't do it justice and can't begin to capture the beautiful smells, cool drafts and cold waterfalls that we encountered. Thoughout the trail we encountered small ground squirrels and at least one Marmoset. Another hiker described seeing a Badger or Wolverine. We had hoped to see some wildlife and we weren't disappointed. The views were literally breathtaking. After several hours of hiking we were ready to get back to the Jeep. The nearly two hour ride home was pretty quiet after descending the pass as we were all tired!

The Highline Trail can be followed to a chalet and then down hill for 4 miles to another point on the Going To The Sun Road for a total of 11 miles. If the shuttles were running one could then take the shuttle back to their vehicle. However, 7 miles was enough for us and catching a shuttle back wasn't an option as they closed down on Labor Day. It seems that much of the park's services would be closing or severely cutting back over the next few weeks as they prepare for their fall/ winter seasons.

Posted by Darren and Joyce Romero at 11:43 PM