We woke to cloudy skies and threatening rain. We had extended one day (last night) here at Salt Creek Recreation Area in hopes of avoiding rain. It didn't look like avoiding the rain today was likely. In fact, after getting hitched up the rain started. We both moved over to the dump station to drain our tanks as the rain fell in earnest. I generally make it a rule to not to drive in the rain for a couple of reasons. A. It's more dangerous. B. It makes a mess of everything. However, we were already committed and the chances of avoiding rain west of the Cascades in the State of Washington for the next several days was almost non-existent.
Today we were pushing south on Hwy 101 for about 242 miles through Washington and into Oregon. We finished dumping and were on the road by 9:30. The hope was to move to an area with a better short term forecast.


View Larger Map
Highway 101 along the West coast of Washington is a very hilly winding two-lane highway heavily traveled by speeding monster log trucks. The highway travels through dense forests passing through just a few very small towns. It's rare to actually get a glimpse of the coast but, Paul leading the way, managed to find a turnout with a view for a quick break.
The off and on rain finally relented as we approached the Oregon state line. After several hours @3:30 we finally made it into the outskirts of Astoria, Oregon. Our destination was Camp Rilea in Warrenton, Oregon along the West Coast.
We quickly got checked in and set up in sites 1 and 2 at the end of the RV lot. There were only two other RVs at the far end.
Camp Rilea is a beautifully maintained National Guard and Armed Forces Training Center. It's only available to active duty and retired military. However, we were allowed to use the facility as a guest of Paul who retired from the Coast Guard. 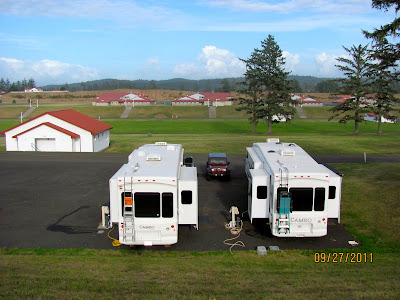 From atop the berm behind our rigs, we could see this small herd of elk. I couldn't get all of them into the frame of this picture. The elk wander around and have been seen in the fields in front of the rigs after dark. 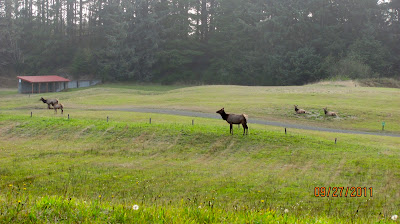 The Camp Rilea RV facilities are basically a blacktop parking lot with full 50 amp hook-ups to include 50 plus channels of cable. There is no WiFi. A very nice bathroom and bath house facility is centered in the 10 site lot.
We are schedule to stay till October 6th and paid $20 per night. The day after arriving we took it easy and washed the rig, truck and Jeep. Like I said, driving in the rain sure makes a mess of everything. We will use the location to explore portions of the coast and the surrounding areas.

Posted by Darren and Joyce Romero at 11:40 AM