June 15, 2011, Junction Texas.
We were up at 6:30 and ready to hit the road by 8:00.  I had hoped to be rolling by 7:00 but somehow that just never happens! I dumped our gray tank and discovered my fancy (read expensive) sewer hose nozzle was broken. The valve inside the nozzle broke. I've already had the hose replaced under warranty and now the nozzle is broken. I paid $150 for the system (hose and nozzle) so it better be covered! I'll look into it when we get to a location and can stay for a while.
After pulling in the slide and retracting the Bigfoot Levelers we were on our way.

View Larger Map
We made it to Fort Stockton before we needed to get fuel. $115 for 30 gallons of diesel plus whatever gas Joyce bought for the Jeep!  It sure adds up fast these days. When I stopped for fuel the right side wheels were 124 degrees in the sun!
I continued to watch the TST TPMS noting that it was 98 degrees outside and the tire pressures were up to the mid 120's with one at 127/8 at the left rear where it was in full sun all day and reading a temp of 118 at times. It's companion on the sunny side was mid 120's with temps about 112. The opposite side was mid 120 psi and 110-112 temps. Just to be safe, I slowed to 55 mph to help cool the tires. I noticed even the truckers were going slower. The posted speeds on the interstate in this part of Texas is 80, 70 for trucks however, there is very little traffic.
We arrived at Eagle's Nest RV Park in Van Horn after over 300 miles around 2:30. The outside temps were continuing to climb and expected to reach 103 today. So we decided we wouldn't push our luck and drive in the hottest part of the day. We found the office locked and a note to find a spot and register. After checking the map on the wall we found a much needed 50 amp site: 6. 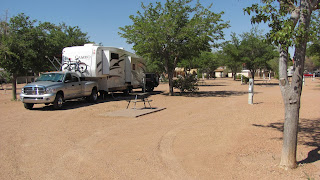 The park only has a handful of guests so it was easy to find a spot. It was very hot so we got set up quick leaving the truck attached. I didn't get it level, but level enough by manually operating the Big Foot. 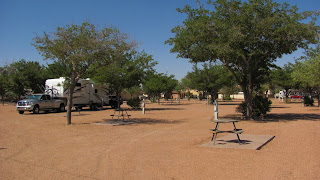 Again we are thankful for the small amount of shade. We paid $29.70 for the night and dropped the check in the box. The WiFi is working well as I'm using it to update my blogs. The water runs warm but that's because it's 105 degrees on our thermometer in the shade!
We should be up early tomorrow with only 165 miles to Las Cruces. It's gonna be hot tomorrow but a little cooler in Las Cruces especially overnight. Hopefully we will beat the heat with an early start!
Posted by Darren and Joyce Romero at 4:54 PM