View Larger Map
We passed through the Mountain Time Zone near the New Mexico border which for us meant it was an hour earlier. I hadn't taken that into consideration and realized this may affect the volume of traffic we would encounter in El Paso. Sure enough, we hit El Paso around 8:30 MST and thus encountered traffic that brought us to a crawl for 20 minutes. After the traffic cleared and we got to moving at highway speeds I stayed pretty much in the same lane as it was nearly impossible to manuever through the traffic.
We made good time and arrived at Hacienda RV Resort around 10:00 MST. We had stayed in this park last year. It is a nice clean park. The rates are reasonable in the summer off-season. The park is probably less than a 1/5 filled. We paid around $30 per night. We quickly got checked into site 175 which is a large pull through and near my father's site. My Father and Karen were out shopping so we were able to get set-up quickly before they came back. 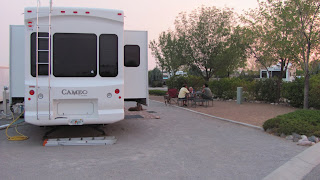 Maggie and Rico were very excited to see them. Maggie is especially fond of Karen and my Father. She often hangs out with them in their RV. We were able to hang outside for a bit before it started to get hot with temps just over 100 which is unseasonably hot for Las Cruces. It was also windy by late afternoon.
I didn't take any pictures till later in the day when we again emerged from our rigs. Evening and morning temps are beautiful. I captured the sunset which was particularly orange due to the smoke from a forest fire in Mexico.
After initially registering for just two nights we were persuaded to stay till Monday. One reason we decided to come to Las Cruces was due to the fact that a couple days ago we discovered one or our two sets of keys for the Jeep were missing. After thoroughly searching the rig, I called my sister who was still camping at N.A.S. Corpus Christi. She searched our former RV site and found the keys in the grass! How fortunate is that? We made plans to have her mail them to Hacienda RV Resort.

I don't like to make reservations but sometimes feel it's necessary for popular areas and holidays. So today, we made reservations for 3 nights beginning on Monday in Santa Fe at a RV Park in the City.

Posted by Darren and Joyce Romero at 3:44 PM