July 19, 2010 Gunnison, Colorado.
Last night, we went to dinner at the Twisted Fork restaurant in Gunnison with Paul and Mary and Jo and Fred. Each of the couples are avid RV bloggers. We had a good if not expensive meal. Be sure to click on their names to check out their blogs. 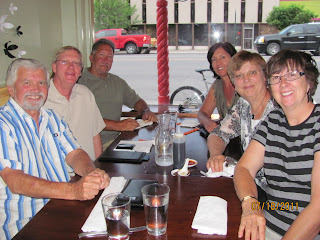 Today we took a ride back up to Crested Butte to do a walking tour of the town. 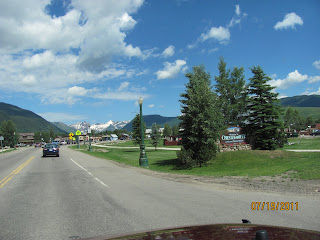 First stop was the visitor center. We picked up a complimentary map of the town and left the Jeep in the free parking lot.
The flowers were in bloom and abundant at nearly every street corner and patch of ground on Elk Ave. the main street in the historic shopping district.
The Colorado General Assembly has designated Crested Butte the wildflower capital of Colorado.

Crested Butte is a Home Rule Municipality in Gunnison County, Colorado, United States. A former coal mining town now called "the last great Colorado ski town," Crested Butte is a destination for skiing, mountain biking, and a variety of other outdoor activities. The population was 1,529 at the 2000 census. 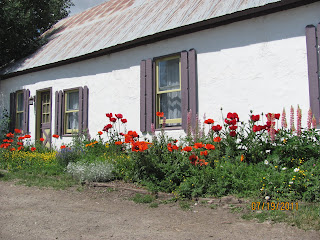 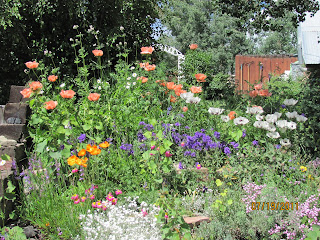 In the 1860s and 1870s coal and silver mines began to open in the surrounding area and many little mining towns formed. However, when silver mining hit on hard times, many of these towns failed. Crested Butte was in a better position to survive because it served as a supply town to the surrounding area.

The other industry that supported Crested Butte was ranching.
When the coal mines closed, the town began to shrink, and eventually the local high school was closed. Students had to travel to Gunnison to go to high school. The town did not revive until a ski area was built on Crested Butte Mountain in the 1960s. From the 1960's to 1990, the Crested Butte public school only facilitated K-5 students, 6th grade and higher attended school in Gunnison, CO. In 1990 Crested Butte offered middle school in the railroad depot building. In 1992 a new middle school was completed which allowed the public school to facilitate grades K through 8. Finally in 1997, a new facility for the Crested Butte Community School was completed. This included the addition of a public high school.

Crested Butte is one of the locations where mountain biking is claimed to have started. The Mountain Bike Hall of Fame is located in Crested Butte. Other popular summer activities in Crested Butte include hiking, backpacking, rock climbing, whitewater rafting and kayaking, 4 wheeling, disc golfing and fishing
Crested Butte is in my opinion a beautiful town with historic charm and style surrounded by modern yet rustic million dollar homes and condos. Below is a historic home on Elk Ave. that is rented as a vacation home. 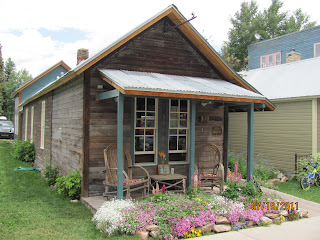 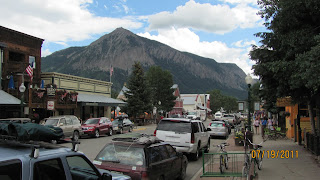 We eventually grew hungry as it approached lunch time. So we happened to come across a public works employee working on a flower garden. He was very kind and told us how to get to Slogar Bar and Restaurant a place that was recommended even by the visitor center. The city employee told us how to get Slogar but also added that it is closed for lunch and only open for dinner. We were disappointed but the city employee quickly suggested a couple of alternatives one of which, was The Last Steep. We stopped there for lunch and were glad we did. I had a taco salad and Joyce had a sandwich meal and both were excellent. 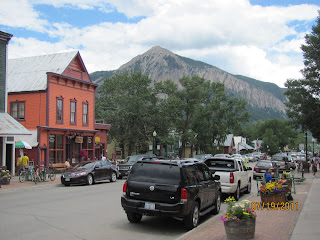 Before long the clouds began to roll in over the mountains and we began to feel the occasional cold drop of rain. The timing was perfect as we had completed our walking tour and were ready to head back to Gunnison and do some shopping before heading home to Maggie and Rico.
We had a wonderful day and look forward to the opportunity to spend more time in Gunnison and Crested Butte in the future.
Tomorrow we will stay home and prepare to move on towards Salt Lake City Utah.
Posted by Darren and Joyce Romero at 8:21 PM