July 13, 2011 Buena Vista, Co.
This morning we made some preparations to move on to Gunnison, Co. tomorrow. One of those preparations involved lowering the fifth wheel hitch in the truck. Lately, I've noticed that the rear tires on the trailer are wearing slightly faster than the front. They are wearing evenly so I don't suspect an alignment issue. However, I've been reading of similar problems in the forums related to fifth wheels that are towed while not level, specifically with the front too high. I've noticed that my front is also high although, I never thought it was too high. Anyway, I lowered my hitch today 2 inches. I wish it had an inch increment but it doesn't. I haven't hitched it up to check it out so, I'll have to wait till tomorrow to see if it's going to work in terms of truck bed clearance and leveling. If it's not a good fit, I'll have to reset the hitch tomorrow (moving day) which may take an hour.
Our neighbors hear at the park are avid Jeepers and ATV riders. They convinced me that I should take Joyce out for a ride that they did yesterday in their Jeep. We generally don't do much of anything the day before moving but we decided to try the recommended Jeep trail just outside of Buena Vista known as the Four Mile Trail System. The name is misleading as it's much longer than four miles.
Now to be clear, we are not experienced 4-wheelers and we are really not into doing anything that would potentially damage our Jeep.  That being said we do like to ride off-road but we carefully select routes whenever possible. I think we would enjoy it more if we had the opportunity to caravan with other Jeeps. 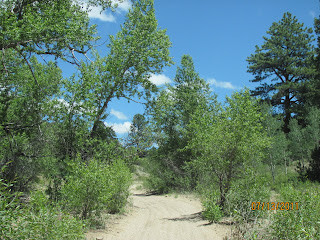 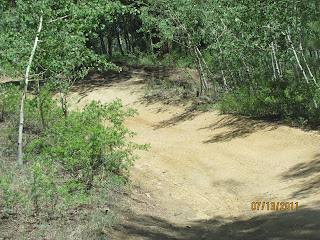 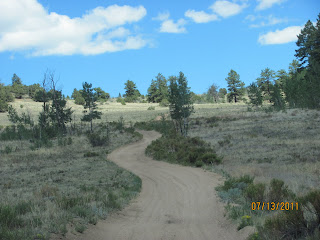 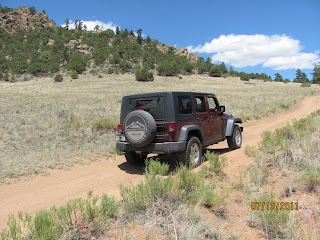 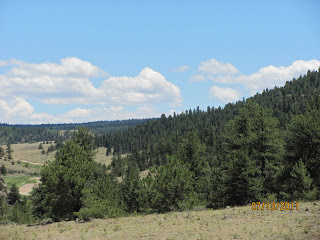 We thought the Jeep road was pretty gnarly in many spots and steep or rocky in others. I used 4-Low in several places because of the steep ascents and descents. Of course we didn't get good pictures of the rougher spots as we were both busy hanging on!
We came around a curve and found these three Rocky Mountain Bighorn Sheep on the side of the road eating leaves and grazing! 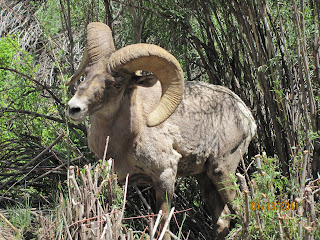 We stopped to take pictures and watched all of them cross the road in front of us. All three were rams (males) and didn't seem to be concerned with us. 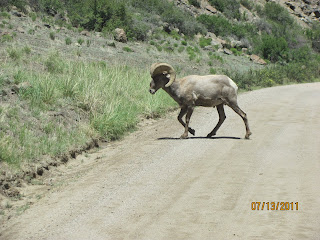 Rocky Mountain Bighorns inhabit the mountains from Canada south to New Mexico. They are relatives of goats, and have balance-aiding split hooves and rough hoof bottoms for natural grip. These attributes, along with keen vision, help them move easily about rocky, rugged mountain terrain. 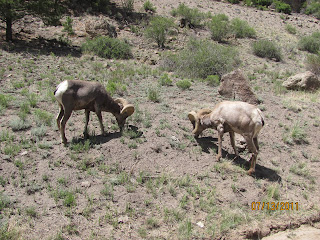 Wild sheep live in social groups, but rams and ewes typically meet only to mate. Rams live in bachelor groups and females live in herds with other females and their young rams. When fall mating arrives, rams gather in larger groups and ram fighting escalates. Usually only stronger, older rams (with bigger horns) are able to mate.
In winter, bighorn herds move to lower-elevation mountain pastures. In all seasons, these animals eat available grass, seeds, and plants. They regurgitate their food to chew it as cud before swallowing it for final digestion. 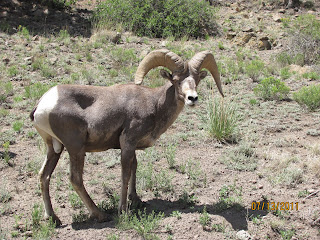 It was a beautiful day and we really enjoyed venturing off-road again. Seeing the Rocky Mountain Big Horns was priceless!
Posted by Darren and Joyce Romero at 9:19 PM