July 21, 2011 Green River, Utah
We got up later than expected as it was chilly. Temps outside this morning in Gunnison were in the upper 40's overnight. It was 60 degrees inside our bedroom at 7:00, so we closed the windows and stayed in bed for another half hour.
We finally got hitched up and ready to roll by 9:30. The ride through the Curecanti National Recreation Area on Hwy. 50 was just beautiful. Unfortunately, we left the camera inside the fifth wheel and I didn't feel like pulling over to get it!

View Larger Map
The weather was clear and hot in the low 90's. We made it to Green River, Utah and Shady Acres RV Park off I-70 not far from the Colorado border. It's about 95 degrees outside as I write this.  The park is very large but there's only a handful of RVs including two next to us. I'm not sure why they would need so many sites. However, Arches National Park is only 60 miles away.  The Green River is about as muddy brown as any river I've seen. We paid $35 for our site with full hook-ups, WiFi and cable. 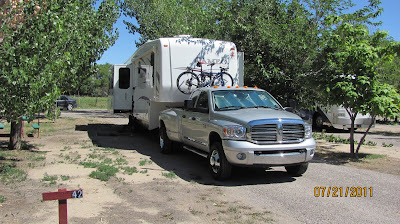 We are staying hitched so we can get an easy start in the morning, destination North Salt Lake City. 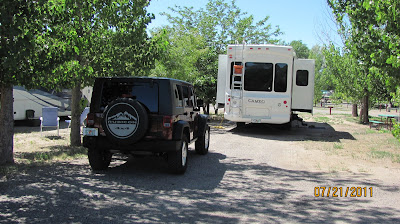 Posted by Darren and Joyce Romero at 3:52 PM