January 24, 2011. Buckhorn Lake RV Resort.
Today we awoke to the awful news that law enforcement officers in St. Petersburg (Pinellas County Florida) had been shot and taken to the hospital. The two officers from the St. Petersburg Police Department were assisting a Pinellas County Deputy Sheriff and a Federal Marshal in executing an arrest warrant when the fugitive who was hidden in the attic shot at the officers hitting 3 of them. We learned later in the evening that the two St. Pete. officers had died and the Federal Marshall was wounded.
Names of Two Fallen St. Petersburg Officers Released

Our hearts and prayers are with the fallen officers and their families. As you know, I retired from the Pinellas County Sheriff's Office so this kind of news hits home.

Prior to learning of the awful news, we took a ride out to Luckenbach, Texas.  Made famous by the song,  Luckenbach, Texas (Back To The Basics Of Love) by Waylon Jennings.
Luckenbach sits along both sides of ranch road 1376 approximately 17 miles south of Fredricksburg, Texas. It is about an hour drive north of San Antonio and an hour west of Austin. You should stop and ask directions! Luckenbach is not easy to find. You better hurry! It might disappear before you get there. 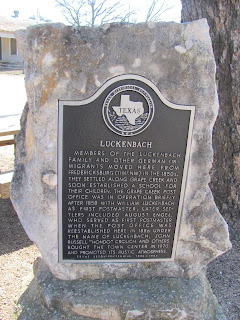 There's not much at all in famed Luckenbach save a small souvenir store and bar formerly a Post Office and a dance hall along with a few homes.
It is hardly more than a bend in the road. A couple of shabby old buildings stand beneath a grove of spreading oaks. The whole town covers less than ten acres. A sign as you enter town says: "population 3". The Luckenbach post office stands at the center. It includes a general store and saloon. Out back, folks sit on benches under the oak trees sipping Lone Star Beer and listening to country music. A cowboy strums his guita
The post office ceased operation in 1971 and became the souvenir shop.
The only other significant structure is the dance hall. It is a genuine old-fashioned Texas dance hall. Local bands play western music on most weekends. Folks from all around the area come to dance and party.
After the very short tour of Luckenbach, we drove to Fredericksburg to do some sightseeing which of course includes shopping and lunch.
Fredericksburg was founded in 1846 and named after Prince Frederick of Prussia. Old-time German residents often referred to Fredericksburg as Fritztown, a nickname that is still used in some businesses. The town is also notable as the home of Texas German, a dialect spoken by the first generations of German settlers who initially refused to learn English. Fredericksburg shares many cultural characteristics with New Braunfels, which had been established by Prince Carl of Solms-Braunfels the previous year. Fredericksburg is the birthplace of Fleet Admiral Chester Nimitz. It is the sister city of Montabaur, Germany 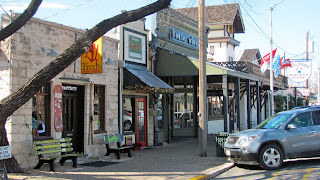 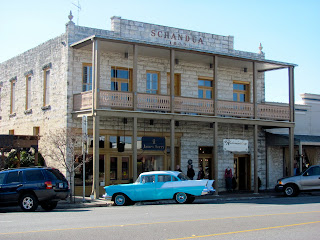 We had lunch at one of the local German restaurants. I forgot the name but, it really wasn't worth remembering. We enjoyed walking around in the bright sunshine just leisurely taking in the views of the historic buildings.
While waiting for Joyce to come out of a shop, I helped a shop owner replace some bulbs on the porch of their business as she was vertically challenged. She rewarded me with some fantastic fudge. I got a sugar rush and then the dreaded crash.
On the way home we stopped in downtown Kerrville and washed the Jeep which helped me to regain some energy.
While relaxing in the sun on our patio, a couple from down the road stopped by. They are also bloggers and had just coincidently discovered our blog this morning. Their blog is: Bullwinkle's Travels. Seeing the pictures in our blog they realized we were a few sites from theirs. It was great to talk with them for a while as the sun was setting. However, once that sun went down it got cold which broke up the party! We hope to see them again while we are here.
Posted by Darren and Joyce Romero at 8:00 PM