January 12, 2011 Gilbert Ray Campground.
We got up early today as it was time to move from Usery Mountain Regional Park to our new destination Tucson Mountain Park and the Gilbert Ray Campground. We pulled out of our site by 9:30 and were on the road after stopping at the dump station by 10:00. The weather was cool but sunny warming from the low 50's to the upper 60's.


View Larger Map
The trip consisted of interstate travel and then some two lane roads as we traveled west of Tucson. We followed the directions provided on the Gilbert Ray Campground website. The road into the park was full of dips and narrowed dramatically inside the park. We came to this park for the purpose of visiting The Saguaro National Park and the Arizona Sonoran Desert Museum. 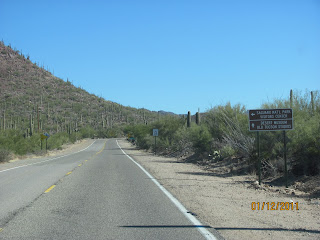 After traveling 124 miles we arrived @ 12:30 at the entrance to the campground, there were no attendants but a self-pay kiosk. The posted instructions stated to find a campsite and then return to the kiosk to pay for the site. Each RV site is $20 a night for electric only. We discovered that only loops H and C were open. However, there were no signs indicating the larger loop A was closed. So naturally we took off for loop A only to have to turn around in the dump station at the back of the campground. Subsequently we checked out loop H and C before settling on site 114 in Loop H. The sites have 30 amp electric only. We must fill our water tank in our rig and work off our pump for water. I always carry about 20 gallons in the tank so we will start off with that amount. There is a water spicket close enough to our site that I can use to fill our tank if needed.
We pulled as far back as we could into our site. I decided to keep the truck hitched to the fifth wheel as we would only be staying for two nights. Staying hitched will give me a time advantage for making an early departure. We plan to head for Las Cruces from here and that will be a long drive for us at nearly 300 miles. 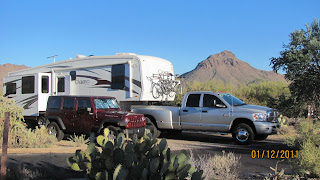 I used the Bigfoot Levelers in the manual mode to level the rig as much as possible without lifting too hard on the rear of the truck.
Gilbert Ray Campground is about 13 miles west of Tucson near the Tucson Mountains. So, it's a considerable drive into town. However, we don't plan on visiting the city on this trip. As you may recall we visited Tucson last June. President Obama arrived in Tucson today for the commemoration on the "Tragedy in Tucson". Our hearts and prayers are with the fallen, injured and the families affected.
Tomorrow should be a busy day.
Posted by Darren and Joyce Romero at 8:41 PM