Our new site at Usery Mtn. Regional Park and a short hike.

January 7th, 2010 Usery Mountain Regional Park.
As you know, we had to move sites per the park's rules after the initial 14 days in one site. So on the 4th we moved from site 9 to site 30. It's on the outer loop but an inside site with a great rear view of Pass Mountain.


After our last dramatic hike where we felt a bit lost, I did some thinking about what kind of gear we should carry with us. So the next day at Walmart we picked up a first aid kit, some portable foil emergency blankets, plastic ponchos and a waterproof match stick holder. Back at home I packed both our packs with the above gear including a small flashlight for each and a pair of leather work gloves. In my pack I also packed a small wool blanket extra batteries and fire starter. I've basically determined that my pack may be too small with the added gear for hiking in the desolate backcountry mountains.
I also purchased a Bushnell Original Back Track from Sam's Club.

BackTrack utilizes GPS technology in its most basic format, BackTrack has only two buttons and stores up to three locations – just mark it and forget it until it’s time to return. At the end of the day, select your location and the BackTrack displays direction and distance to travel. Use it to find your car in a crowded parking lot, your treestand or the trailhead, even to rendezvous with your group. It’s extremely compact and stows conveniently in your pocket, pack or purse.
It's a very simple GPS that can mark up to three locations at a time i.e. you car. The Back Track then gives you a directional arrow and distance (as a bird flies) to your car or whatever location you set into the Back Track. At $39 it was certainly cheaper and less complicated than a full scale portable GPS.
I did a short hike today down to the Salt River in the Tonto National Forest to test the Back Track. 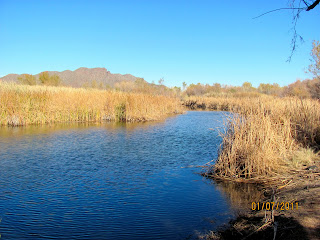 The Bushnell Back Track so far works as advertised. I obtained a satellite signal after getting out and set the Back Track to the location of my vehicle. The unit powers off after a short period of inactivity. When you turn it back on it immediately obtains a satellite signal and picks up in the mode from which it turned off. It measures the distance initially in yards and then eventually in miles and tenths of a mile. Right now I'm very satisfied with it.
Posted by Darren and Joyce Romero at 8:40 PM