We enjoyed our two week stay at Valley View RV Park. During our stay we met a full time RV couple, Paul and Doris whom have started a business weighing RVs known as RV Weigh. We got to know them and have them over for happy hour during our stay.  We decided along with our traveling companions Paul and Paula to have our rigs weighed. So we each paid the $60 fee and first had our trucks weighed while unhitched and full of fuel prepared for travel with all occupants. My truck weighed 8,550 lbs. and I was given the individual weights for each tire and axle which were well within the rated limits.
Today, just before leaving the campground for Missoula Montana we had our trucks and trailers weighed hitched and again received individual weights for each axle and tire.

With our 2009 Dodge Quad Cab 3500 Long Bed DRW 4x4 (4:10 rear end) and Carriage Cameo combined we were over our rated Gross Combined Vehicle Weight of 24000 lbs. by 100 lbs.  We joked that if we had Rico ride with Joyce in the Jeep we would be under!
As anticipated our Cameo weighed more on the off-door side (driver's side) which contains the heavy components of the entertainment center and kitchen in the slide as well as the bedroom slide. The off-door side weighs 775 pounds more than the door side. I've always tried to
load heavy items on the door side to counter-balance but obviously it hasn't worked completely! The total weight of the rig came it an 15,550 lbs. including a tongue weight of 3,275lbs. Total weight on my dually axle is 6, 975 lbs. well under the Gross Axle Weight Rating (GAWR) of 9,350 for my truck. Something to consider for those of you with SRW trucks! While we are at it the front axle of the truck came in at 4,850 which is under the GAWR of 5,200 for the front axle.
Now the two Cameo trailer axles are rated at 7K each. These were the weights that I was most interested in. The rear axle total was 5,950 lbs. under the GAWR by 1,050 lbs. The left rear tire was supporting 3,200 lbs and the right rear tire 2,750 lbs. (the lightest).
The forward axle of our Cameo total was 6,325 lbs. under the GAWR by 675 lbs. The front left axle tire was supporting 3,325 lbs. which is more than the others. The front right axle tire was supporting 3,000 lbs. Each of our Goodyear G614's are G-rated at 3,750 lbs. each at 110 p.s.i.
So, the good news is that we are within specs for the axles and tires although not evenly balanced. We are also well within specs for the Gross Vehicle Weight (GVW) of the truck. We will work on the balancing of the trailer weight to the best of our abilities...but I think it's largely due to the unbalanced design of the trailer. With regard to Paul and Paula in their Ford and Cameo...let's just say we were a lot lighter!
After getting weighed and provided copies of the results we said our good-byes to Paul and Doris of RV Weigh and were on the road by 9:30. We had about 260 miles to cover to get to Jim and Mary's RV Park in Missoula Montana. The weather was clear and expected to be 95 in Missoula by late afternoon.


View Larger Map
I took the lead with Joyce following me in the Jeep. The route was hilly through some beautiful farm country on a two lane highway taking us up to Interstate 90.
Shortly after turning on Interstate 90 and climbing a large hill I began noticing that I could no longer see Paul and Paula behind us. I tried calling them on the phone but couldn't get through. Finally they called me and told me they were on the side of the interstate with a turbo problem and would call right back. Joyce and I pulled into a truck stop and waited. Long story short...after about 2.5 hours they were back on the road after a diesel mechanic reattached a clamp and hose that separated from the Ford turbo. They were lucky the diesel mechanic arrived with the tow truck and was able to fix it otherwise, they were looking at 3-4 days of waiting on a Ford dealer and all the complications that go with it.
Once we got going again, I let them take the lead so that we would be behind them if they continued to have trouble. 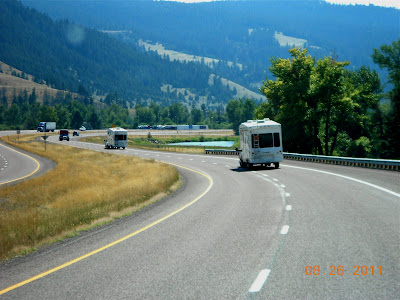 We ended up making one more stop on the interstate as Joyce radioed to me that my weather station was about to fall off it's pole attached to my ladder. It was too late by the time we pulled over, as Joyce saw it fall and splatter into a thousand pieces into the shoulder of the interstate. I really liked that weather station!
We arrived at Jim and Mary's RV Park in Missoula shortly after 5 P.M. considering the delays, we still made good time. We were all pleasantly surprised at the shady mature trees and beauty of Jim and Mary's RV Park. We both got large grassy sites (though not together) with mature shade trees which was real nice considering the heat wave and 95 degree temps. I'll post pictures of the park later.
Posted by Darren and Joyce Romero at 9:10 PM