April 21, 2010.
The weather was beautiful with lows overnight in the mid 50's. We were up early and took Maggie and Rico for a long walk around Brantley Lake State Park, NM. We checked out the boat ramp and walked one of the trails. However, this blog is about Carlsbad Caverns! So fair warning, there's a fair number of photos!
We were out the door and on our 47 mile journey to Carlsbad Caverns by 10:00.  Surprisingly the start of the road into the caverns is in White City.  Carlsbad Caverns is part of the Guadalupe Mountains National Parks. 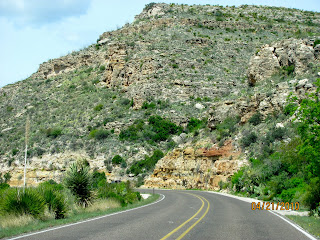 The road into the caverns travels through beautiful gorges and climbs up to over 4000 ft. 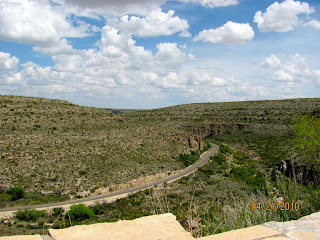 The National Park Service building for the Caverns sits on top of the hill / mountain. 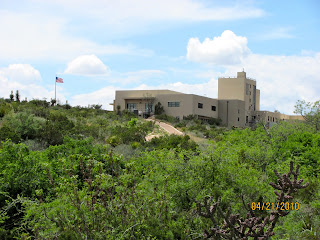 We had our choice of taking the elevator down 750 ft to the Main Room or hiking in from the natural entrance. We were told that hiking in may take an additional 1-1.5 hrs. We were concerned about being away from the dogs for too long, so we took the elevator down. You are not permitted to take food, gum or beverages other than water into the cavern. You also cannot use hiking sticks and of course, you can't touch the formations.  I took about 196 pictures but only posted a few. 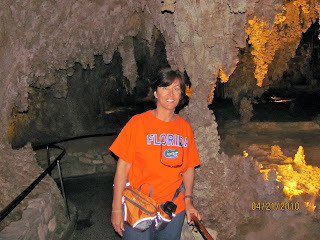 History of Carlsbad Cavern National Park
More than 1,000 years ago prehistoric Native Americans ventured into Carlsbad Cavern seeking shelter. They left behind no record of what their impressions of the cave were, but they did leave some mysterious drawings on cave walls near the natural entrance. Much later, in the 1800s, settlers discovered the cavern, drawn to it by the spectacle of hundreds of thousands of bats rising up out of the natural entrance in the evening. Some stayed to mine the hugh deposits of bat guano in the cave and sell it as a natural fertilizer. One such man, a cowboy named Jim White, became fascinated by the cave and spent hour after hour exploring it. White was eager to show the many natural wonders of this extraordinary place to others, but few persons believed his improbable tales of a huge underground wilderness full of unusual cave formations. It took photographs to convince skeptics that Carlsbad Caverns was everything it was said to be and more. 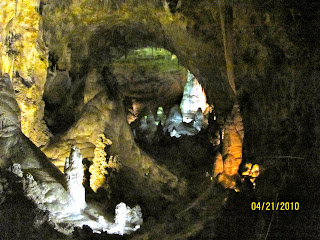 Black and white pictures taken by Ray V. Davis, who accompanied White on a cave trip, were displayed in the town of Carlsbad in 1915. They created a sensation. People suddenly clamored to see the marvelous cave for themselves. White took them on tours that began with an unceremonious 170 foot descent in a bucket once used to haul bat guano from the cave.
Word of the cave spread, finally reaching Washington, D.C. Again, there were nonbelievers, but in 1923 the U.S. Department of the Interior sent inspectors Robert Holley to investigate and see whether Carlsbad Cavern was truly an outstanding natural scenic wonder. Originally a skeptic, Holly wrote in his final report: "...I am wholly conscious of the feebleness of my efforts to convey in the deep conflicting emotions, the feeling of fear and awe, and the desire for an inspired understanding of the Devine Creator's work which presents to the human eye such a complex aggregate of natural wonders...." 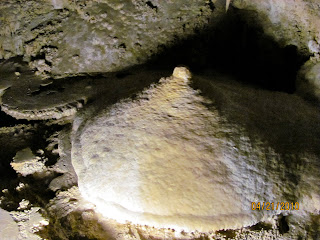 Later that year Carlsbad Cavern was proclaimed a national monument. White, who was to continue his cave explorations for most of his lifetime, became its first chief ranger. Seven years later Carlsbad Caverns National Park was created to protect the cave. Through illustrated articles published in magazines such as National Geographic and by word of mouth, Carlsbad Cavern became one of the world's most celebrated caves. Since its establishment, the park has been expanded and today includes 46,766 acres and more than 80 other smaller caves. 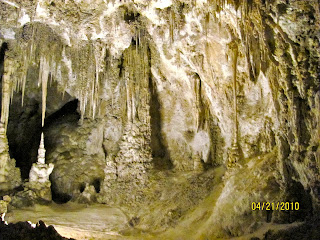 The cavern is very dimly lit with some back lighting on the prominent features. I had seen pictures of the caverns and was surprised that it was so dark as the pictures I had seem made it appear well lit. To be honest, my pictures were dark, I used the enhancement feature on my Mac computer to bring the pictures to light.
After completing the self-guided 1.25 mile hike in the Big Room, we took the elevator back up to the main building. We wanted to see the bat amphitheater and the natural entrance so we hiked to the natural entrance of the caverns.
The Mexican Free Tail Bat inhabits the entrance to the cavern and is famous for their bat flight out of the caverns in the evening. However, we were told the bats have yet to return to the caverns from Mexico so there isn't a bat flight exhibit scheduled till they return. Below is the amphitheater for the bat flights. 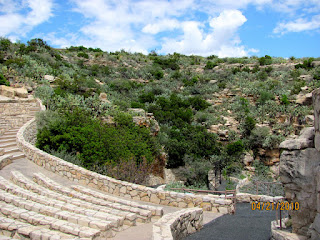 We walked down the steep descent to the natural entrance and enjoyed the view. 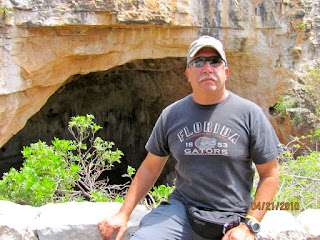 As you can see in the photo the hike down is a series of switch backs. 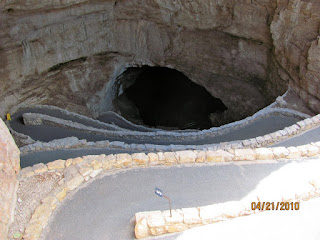 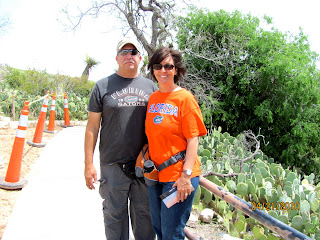 We enjoyed our visit and after a few hours made it back to our car parked on the top of the mountain/ hill over looking the valley below.  Our entrance fee ($6 each) was free this week as are all the entrance fees to National Parks this week. 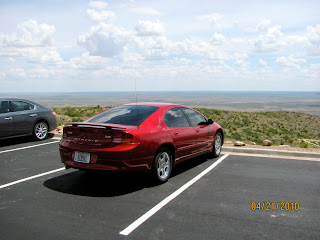 Back home we grilled out and watched a thunderstorm roll in after dark. We got some rain that lasted only a few minutes, but the view from our ridge was spectacular!
Posted by Darren and Joyce Romero at 8:12 AM