April 2, 2010.
We didn't do much but hang around the RV most of the day.  It was a bit humid with light drizzly rain. The rain cleared by late morning. I put the awning out and spent most of the day outside.
I got an e-mail from our friends Dale and Betty Vaughn in the park. Apparently Dale had a rough night and was sick this morning. So we spent some time with Betty while Dale rested.
Later Joyce and I went into Dripping Springs for pizza at a small shop in town. The pizza was nothing to write home about. We picked up a box of soda for Dale but when we got back, he was up and outside making preparations to leave the next day. He was feeling better but not 100%. We chatted for a while before calling it a night.
April 3, 2010.
We woke to a beautiful sunny day with little or no wind. Temps overnight were in the upper 40's. It was 56 degrees in the RV when we woke up at 7:00. Someone (Joyce) had put away our electric heaters thinking we wouldn't need them anymore! We got up and got going and and it was already warming outside expected to hit 84 degrees.
We said goodbye to Dale and Betty as they were hitched up and ready to pull out this morning heading home to Alliance, Nebraska. Dale seemed to be much better today.
Joyce and I got out of the park around 9:00 and headed out to Wimberley, Tx in our truck about 27 miles away to attend the Wimberley Lions Market Days. 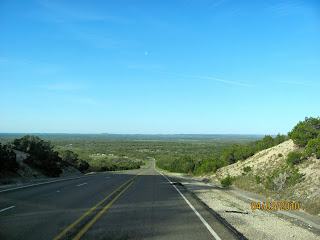 The route to the market was via some Farm to Market (FM) roads. A Farm to Market Road (FM) is a secondary state highway. The system was conceived in the 1930s as part of a "Good roads" project to ensure farms (or ranches) have all-weather access to markets. The system was originally funded by an earmark from the general fund with state funds (no federal funds). Some FM roads are eligible for federal aid, however.
There is no difference between a FM, Ranch to Market (RM) or Urban Road (UR) for state purposes. RM markers are generally found in Western Texas where ranches are dominant, while FM roads are generally found in eastern Texas where farms dominate. There are some exceptions to this general rule though
We saw this antique truck sitting in a field near the intersection of two roads. Throughout our travels we've seen antique vehicles and rusty tractors or farm equipment set out on display on some properties. Kinda neat. 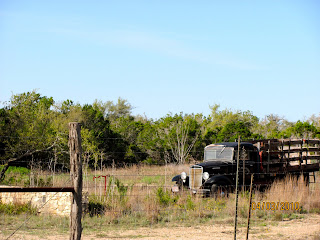 As we pulled into Wimberley, Tx we immediately found a dirt lot manned by Lions Club members that collected our $3 for parking.  Then we walked to one of several entrances to the Wimberley Lions Market Days. 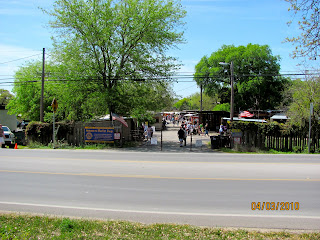 Wimberley Lions Market Days is billed as: The oldest outdoor market in the Texas Hill Country and the second-largest in the state. We feature over 475 booths of everything you can’t live without. Come stroll our tree-shaded paths, listen to live music and shop to your heart’s content. 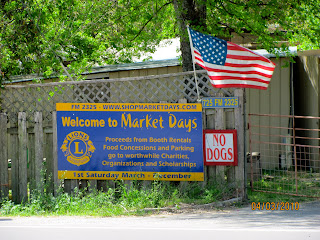 There is no entrance fee. We strolled through the market noting the charm and character of the small huts set amongst the trees. 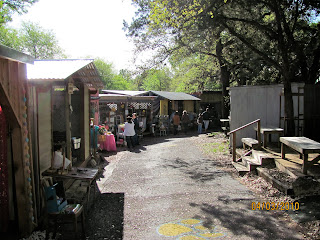 They got the right idea with this flea market.  Set amongst the trees, there's plenty of shade. 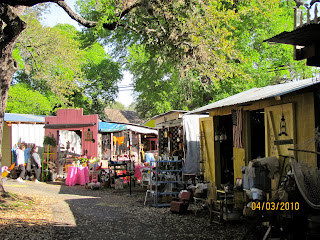 However, there is no where to sit and take a load off or people watch. Unless you sit in one of the concession pavilions also run by the Lions Club. After walking through the maze of vendors, Joyce got her chance to look at every booth (some twice). We managed to get out of there without doing damage to the budget! 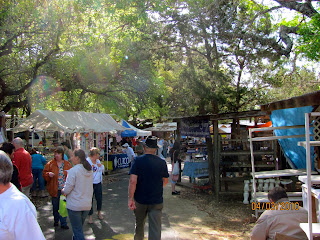 On the way back home we took a route through Dripping Springs and stopped in the down town area. Joyce took a picture of me wearing the hat I bought at the market. We ran into some of the folks from Cottonwood Creek Rv Park and the owner, Sherry at the market and when she saw my hat she proclaimed that I'm now a "Texican".  I don't know about that, but I do like what I've seen of Texas to date. 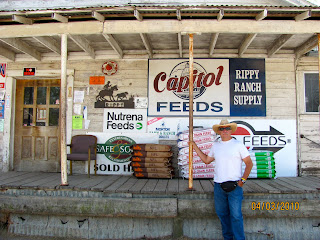 Back home, it was time for a little siesta. 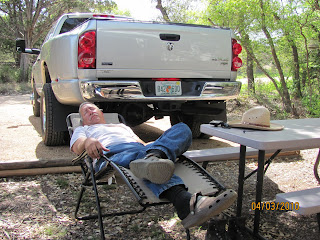 Later in the evening we grilled a couple of burgers on our Coleman Road Trip Grill. One of the reasons we purchased this grill when we were preparing for our full time RV lifestyle, was because it was compact and fit the rear storage area that I had dedicated to a grill. It works well however, we are not satisfied with the teflon coating on the grill grate. It's not easy to clean. I prefer using a pan with the optional pan grate on the left in the photo whenever possible. I like it for making breakfast! 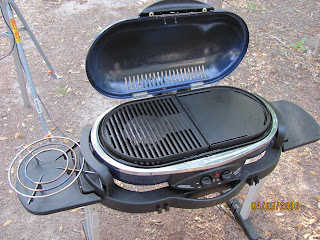 We spent the rest of the evening chatting with folks in the park and just relaxing. We shall see what tomorrow brings.
Posted by Darren and Joyce Romero at 8:30 PM