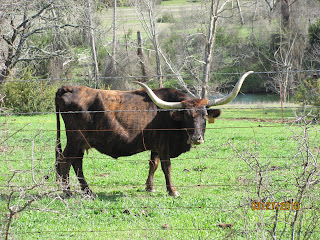 March 27, 2010.
We awoke to another beautiful sunny day in the Texas Hill Country.  Lows overnight were in the upper 40's but it warmed today to 80. However, we have yet to feel the need to turn on the air conditioner. I woke with a sinus headache and Joyce complained of the same. The Bluebonnets and other wild flowers can be seen blooming on the hill sides.
We traveled to downtown Austin about 30 miles away.  We stopped to explore the historic land management building, now the Capital Vistors Center and the Texas Capital Building. The Texas Capitol is an extraordinary example of late 19th century public architecture and is widely recognized as one of the nation's most distinguished state capitols. It was placed on the National Register of Historic Places in 1970 and designated a National Historic Landmark in 1986 for its "significant contribution to American history."
Sited on one of Austin's highest points, the Capitol anchors the northern periphery of the downtown commercial district and commands a sweeping view towards the Colorado River from its southern façade. The main campus of The University of Texas at Austin is situated four blocks to the north. Wonderful views of the Capitol's dome from many vantage points throughout the Austin area are protected from obscuration by state law.
Completed in 1888 as the winning design from a national competition, the Capitol's style is Renaissance Revival, based on the architecture of 15th-century Italy and characterized by classical orders, round arches and symmetrical composition. The structural exterior is "sunset red" granite, quarried just 50 miles from the site. Additional structural support is provided by masonry walls and cast iron columns and beams. The foundation is limestone. Texas paid for the construction not in dollars, but in land: some three million acres in the Texas Panhandle that would later become the famous XIT Ranch.
An extraordinary edifice by any measure, the 1888 Texas Capitol is the largest in gross square footage of all state capitols and is second in total size only to the National Capitol in Washington, D.C. Like several other state capitols, the 1888 Texas Capitol surpasses the National Capitol in height, rising almost 15 feet above its Washington counterpart.
After leaving the Capital Visitor Center, I was beginning to feel nauseous from my headache so I rested for a while on a bench on the capital grounds. Joyce continued on inside the capital and explored. 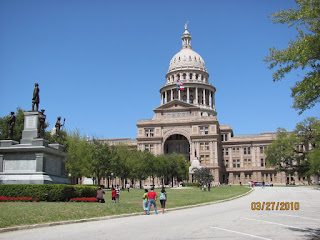 By the time Joyce returned from visiting the Capital, I was feeling better and we continued walking and came upon The Cathedral of Saint Mary.  The church was built in 1872 after Austin became the permanent capital for the state of Texas 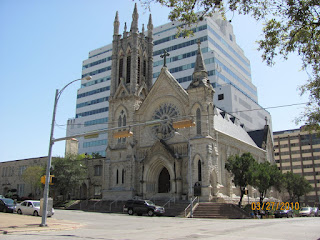 We then explored the popular 6th Street District. Likely Texas' best known street, the seven block's of 6th Street between Congress and IH 35 are certainly Austin's entertainment center. With a little help from it's many like-minded sister streets, 6th Street is the heart of Austin's live entertainment scene and the capital of third coast music. 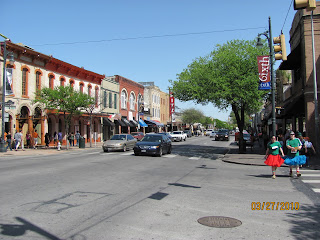 We stopped in one of the bars for a late lunch. A waitress was ready to get and serve our alcoholic beverage order, but we had to walk to the counter, order and pick-up our soft drink and food order. It seems alcohol is the priority! Although a legendary hot spot for music and entertainment, my view of 6th Street was that it was a row of historic buildings converted to bars and pubs. In my view, a mix of New Orleans Bourbon Street and Key West. There were plenty of colorful characters around. I'm sure the area is hopping at night. 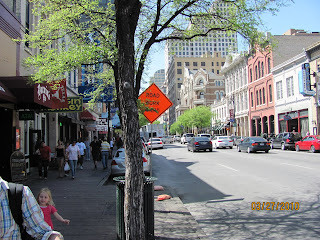 After about 4 hours, we were ready to head back home.  We both agreed the Texas Capital of Austin is easy to navigate and appeared to be very clean.
On the way home we took a back road along a creek and photographed some Texas Longhorn Cattle, including the one at the top of this page. Back home we relaxed and spent some time talking with our RV park neighbors. The owners, Sherry and Les  stopped by. They've been so accomodating and we love the park and the area. So we've decided to pay for an additional two weeks giving us three weeks total. So unless we get "hitch itch" we won't be leaving until April 11th. There is still plenty to see around here in the Texas Hill Country. I think Joyce's list of things to see and do is growing when it should be shrinking!
Posted by Darren and Joyce Romero at 8:48 AM