March 4, 2010.
The sun was shining brightly and temps were in the upper 30's when we rolled out of bed.  I was on a mission.  As you probably surmised from the previous blog submission, I was not happy with our "premium" $18 site in Fontainebleau State Park.  Aside from slipping and falling in the mud surrounding our rig, I didn't like being sandwiched between rigs with no views.  For me it's all about the views!  I would have been okay with it if we were just spending a night or two, but we are here for a week. 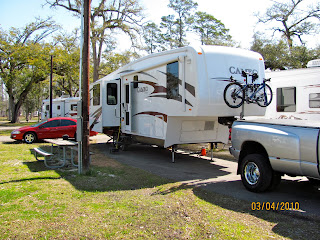 Our "premium" site CI127 which is a very small pull-through site is side by side with its neighbors and surrounded by mud that isn't as evident in these pictures.  50 amps, made this a "premium" site. 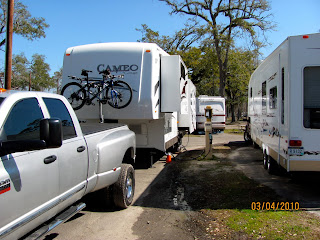 I was determined this morning to try and find another site.  I noticed that the perimeter sites in the campground had great views and large lots.  I looked for those sites on the Reserve America site and learned that most are "not available on-line".   Hmm...interesting.  I had my eye on site 130 which was across the road from us.  It was empty and dry except for the back field behind the pad.  I called the ranger station and spoke to a ranger about moving to that "non-premium" 30 amp lot.  I was told over the phone that it was reserved for emergencies!  I explained my displeasure with our site and the mud mote around it.  I told him that yesterday, I had slipped and fallen in the mud.  He wasn't budging but invited me down to the office to see the clerk and check what else was available.


Joyce and I immediately drove to the office about 2 miles away.  I explained to the clerk the aforementioned situation and our displeasure.  She appeared to be new and unaware of what to do.  I told her I was interested in moving to site 30 and told her about the conversation I had with the ranger on the phone.  I suspected the ranger I had spoken with was in the office and I knew he would overhear.  He told her to go ahead and give me the site.


So the morning was spent moving to our 30 amp non "premium" site.  My mood changed and I felt as bright and sunny as the full sun shining on our new unobstructed site, #130. 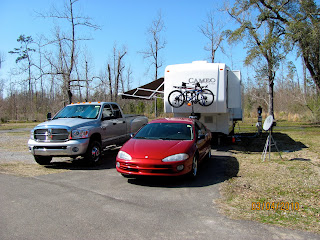 We now have a view of the woods and the swamp water behind our rig.  I noted a lot of deer tracks while hooking up our utilities. 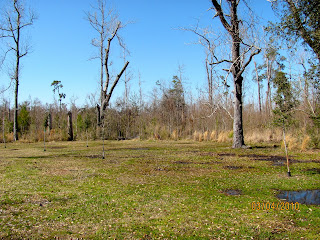 We have room to park both of our vehicles.  Maggie and Rico can now be outside without being in the mud.  Now I look forward to our stay!  So, the moral to this story is that I will in the future continue to refrain from making sight unseen reservations!  Especially when there are sites that are "not available online". 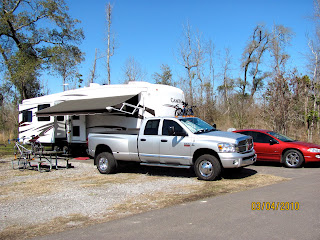 The afternoon warmed up to the low 60's and it was beautiful outside.  Joyce went to Walmart and I took a spin around the park on my bike.  I headed to the shore of Lake Pontchartrain. 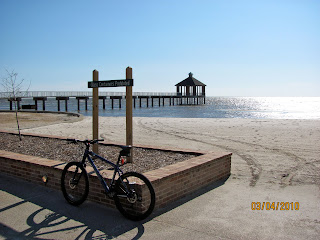 The wind was blowing across the lake from the South and creating waves.  It was chilly in the cold wind off the lake. 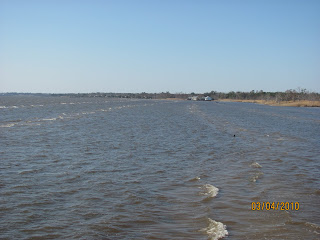 I continued my ride around the park and came upon the remodeled/ rebuilt cabins that are for rent in the park, right on Lake Pontchartrain! 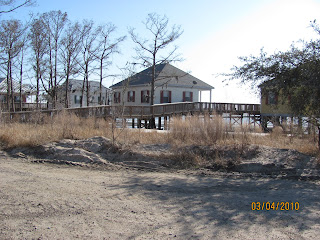 Later in the afternoon, my younger brother, Damon stopped by with his three children, Sophia, Sergio and their baby, Santo.  We made plans for dinner and were soon joined by Damon's lovely wife, Sadie at our campsite.  Later that evening we drove to Vera's Seafood Restaurant in Slidell.  We had good company and good food. 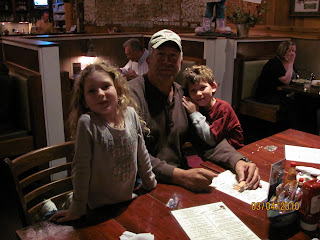 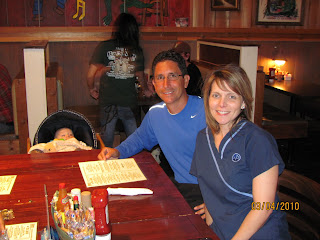 As I read back over this blog, I can't help but to consider the frustrations of the last two days, with the tire and campsite.  Those minor frustrations pale in comparison to the frustrations of a full time job or my former career in law enforcement.  How does that saying go?
Posted by Darren and Joyce Romero at 8:01 AM