March 17, 2010.
We woke to an overcast morning, ready to get an early start on our travel day.  Temps were in the 50’s and expected to warm to the upper 60’s.  We noticed a lot of pollen in the street that had been gathered by water run-off from the light rain over night.  Tree pollen is at an extreme level right now, and we are feeling it.
We hit the road about 9:00 and we were in Beaumont, Texas by 10:00.  We continued through Houston taking I-610 to Highway 290 towards Austin.  Traffic was a nightmare through Houston with traffic jams caused by construction.  The roads through the cities and overpasses were rough but generally the highways were smooth.  We did experience some steady strong wind on the road.
Once we were clear of Houston we stopped at a truck stop off Highway 290    to fuel up, give Maggie and Rico a break and to eat some lunch as it was about 12:30 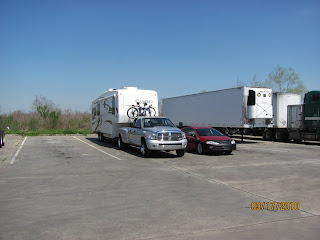 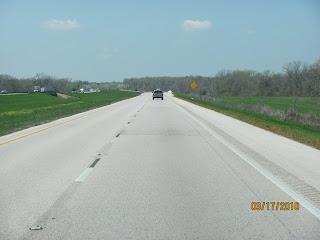 We were about 5 miles from the our destination, the Somerville Lake Corps of Engineers campgrounds, when Joyce using her walkie informed me that her car was running hot, the gage was in the red and the idiot light came on.  I pulled over and checked it out.  We were in the middle of nowhere.  She said it was cooling off and the light had gone out.  I had her run ahead of me to look for a garage or public parking lot.  As she continued to drive she radioed it was cooling down.
Subsequently, we ended up driving to the campground because we didn’t pass anything along the way.  Her car cooled down and we’ll address the issue tomorrow.
We are at a Corps of Engineers park, Yequa Creek which is on Lake Somerville near the town of Somerville and North of Brenham, Texas.  Immediately after entering the gate house operated by volunteers, we saw two or three deer grazing. 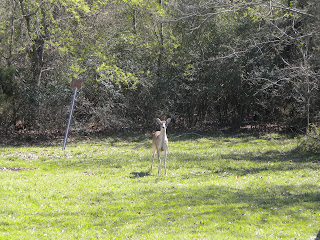 Yequa Creek has about 47 Rv Campsites that are 30 amp with water for $20 a day.  There is a dump station in the park.  Rocky Creek is a little further up the road (we didn’t make it there yet) it has 50 amp. service.  However, when I called, the person I spoke with couldn’t tell me the difference between the two campgrounds and in fact said they are both the same.
Anyway, we are fine with 30 amp service and were able to pick out a nice long site with a view of the lake out the back window. Both of these campgrounds are first come, first serve and currently don't take reservations. 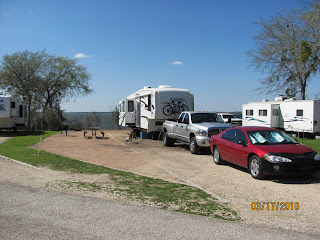 I had to rearrange our vehicle after taking the above pic.  It looked like we were in a parade.  A view out the front of our site. 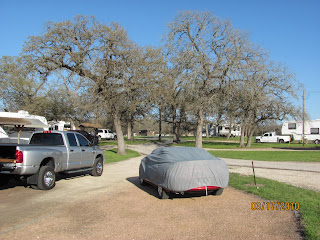 Tomorrow, we will take Joyce’s car into town and see about getting it fixed.  I suspect it may be the water pump.  Then we will try and do some exploring of the campgrounds.
Posted by Darren and Joyce Romero at 8:52 PM