February 18, 2010.  It was a frosty start to a beautiful day with highs in the mid 50's.
We had made plans to take a ride out to the beaches of Gulf Breeze.  We wanted to tour Fort Pickens, part of the Gulf Islands National Seashore.  Our daughter, Ashley had decided to go with us.  Andrew had to work.  We went to Panera Bread for lunch before heading out to Fort Pickens.  The fort has one daily tour at 2:00 p.m. and we wanted to get there in time for that.  We took the drive out to the beaches and soon came upon the sign board for the National Park indicating the entrance prices. 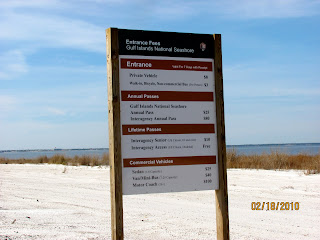 The national park service ranger station is actually located about 6 miles from the fort.  It was about 1:45 when we got to the ranger station.  We paid the $8 entrance fee and were assured we would make the drive in time to catch the tour. 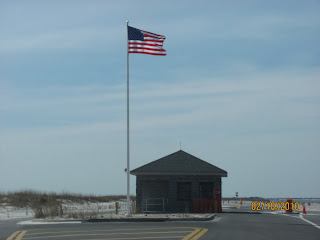 It was a long drive down what is essentially a large sandbar on steroids.  You could see the water on both sides of the road behind the sand dunes. Obviously, blowing sand can be a problem as it gets blown over the roads.  We saw a bull dozer at work removing sand in some of the beach parking areas along the drive. 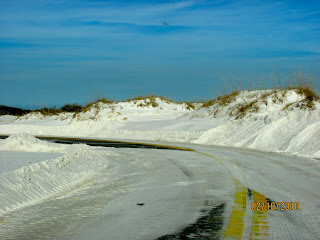 Hurricane Ivan had blown across the island and the Gulf Breeze communities in 2004.  It not only caused severe devastation to the local communities, it resulted in the closing of the Gulf Islands National Seashore for several months.  Along the drive as we got closer to the fort, the sand bar widened and there were some areas with trees.  However, most of the trees were dead or dying as they had obviously suffered damage from the hurricane. 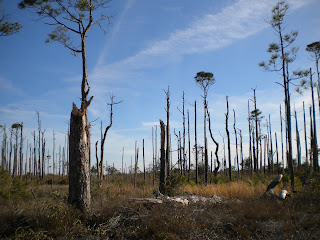 Before long we came upon the entrance to Fort Pickens.  The original construction was completed in 1834.  It was built with the purpose of protecting Pensacola Bay from attack from foreign adversaries. 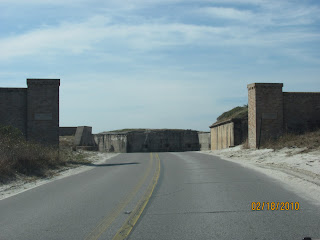 However, the only battles the fort participated in were not with foreign adversaries but with Americans during the civil war.  Fort Pickens was a union fort and remained such during the civil war.  The confederate army attacked the fort by land in and effort to overrun it.  However, that effort was unsuccessful and it never fell to the confederate armies. 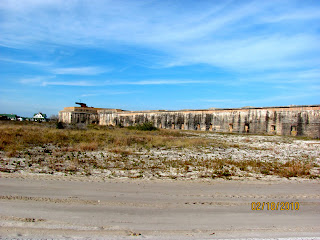 The fort was frequently updated with larger and more powerful cannons.  In 1886, it housed Geronimo and several other Apaches as prisoners until 1888.  Geronimo became a popular "attraction" for the Pensacola area until he was moved to Mount Vernon Barracks in Alabama. The fort remained active until after World War II when it was then deemed surplus and obsolete.  The fort became a Florida State Park.  However, Congress eventually turned the area into a National Park. 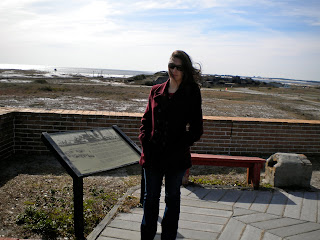 Ashley took the tour with us.  Here Joyce and Ashley are standing on top of the fort near one of the cannon.  Behind Ashley in the picture above is Pensacola Bay.  It should be noted that the length of the island sandbar has fluctuated over the years due to the shifting sand and erosion by the waves and storms.  Behind Ashley and Joyce in the picture below is the Florida mainland and Pensacola Naval Base. 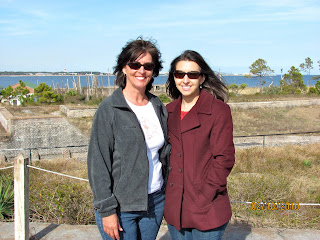 The park had a large campground with several loops.  However, Hurricane Ivan had destroyed the campgrounds.  The park has been working to repair the camp facilities.  From their website:  Beginning February 1, 2010, Loop A with 40 campsites with water and electric will be available to campers while the rest of the Fort Pickens Campground is closed so that contractors can replace utilities. There is not an exact date that the main section of the campground will reopen, but it is expected to be by March 1, 2010. Though some parts of the campground may remain closed until the project is completed later in the spring, the majority of sites--all with water and electric hook-ups--should be available for use by spring campers. 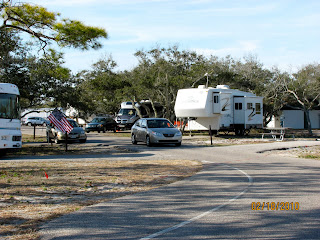 All sites are $20.00 a night, and on a first-come-first-served basis. All campers must register at the Fort Pickens Ranger Station between 8:00 a.m. and 5:00 p.m
We enjoyed our visit as it was a good way to spend and afternoon. If you are in the area, it's worth the visit.  If we had time, we would have explored the miles and miles of beaches within the park.
Posted by Darren and Joyce Romero at 8:53 AM