Feb. 1, 2010.  We got up to cloudy skies and temps in the upper 40’s.  This was a travel day, destination Grayton Beach State Park near Destin, Fl.
Ranger Dylan Shoemaker stopped by first thing in the morning at about 7:45.  We said our good-byes and pledged to stay in touch.  I’ve said it before, but Dylan was great to work with/ for.
We got packed and on the road by 10:40 E.S.T.  I had hoped to be on the road by 10:00.  I had difficulty maneuvering my truck into place to hitch up to our Carriage Cameo 35SB3 fifth wheel.  I had to drive off the pad and go back and forth in a small space to get aligned.  However, because of the loose dirt and sand, I lost traction trying to back up onto the pad.  Thankfully, I just put it into 4wd and that quickly solved the traction issue.  So Dylan, sorry about the disheveled soil! 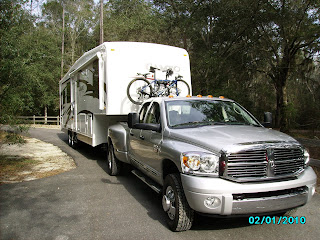 Once we were hitched-up and got underway, it was a slow creep up Godwin Bridge Road as it was full of drainage bumps from the last few rains.  Joyce led the way in her car to make sure we didn't come across anyone on the curvy narrow dirt road.


A short drive to I-10 and it was smooth sailing.  We made our only rest stop about 150 miles out, west of Tallahasse on I-10.  We stopped for about 1/2 an hour and gave Maggie and Rico a break. Joyce made us lunch and we ate together in my truck.


While at the rest-stop, I emptied the two five gallon diesel fuel containers that I carry in the bed of the truck into the truck's 36 gallon tank.  I carry the extra fuel as a precaution.  I like to avoid pulling into fuel stations with the whole rig.  I knew I had plenty of fuel to make it, but piece of mind is priceless.  Maggie and Rico ride with me in the truck on a flat elevated platform that fits over the folded back seats of the truck. The platform is high enough that they can look out the windows without effort. They rode patiently and slept most of the way.
After about 5 hours on the road and 248 miles,  we arrived at Grayton Beach State Park just before 3:00 C.S.T.  We didn’t have a reservation, but that was not a problem.  I had checked Reserve America, the reservation site last night to make sure they had open sites.  We were assigned lot 44 @ $33 a night including tax for 50 amp. and full hook-ups.  We decided to stay at least through Saturday.  The site has an amazing back window view of a marsh. 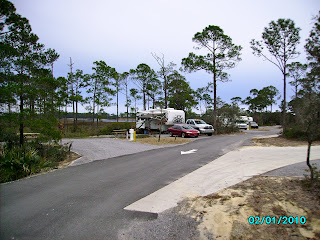 Our site is covered in small loose grey gravel. It’s in a new loop that was built last summer.  The only negative is that the site has a dramatic slope toward the rear.  It’s so off level that my Big Foot auto leveling system refused at first to try and find level.  On the second try, it tried to find level, but required some manual adjustments.  The front of the rig is very low and the rear is set very high!  In the picture below, The truck is only about a foot in front of the trailer, you can see the front of the trailer is lower than the bed of the truck. 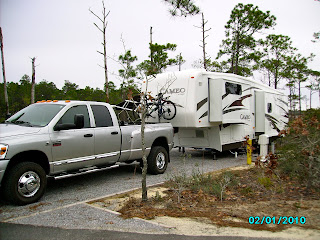 We checked out the bath house facilities and discovered them to be new and very clean.  We then took Maggie and Rico for a short walk as it began to drizzle.  We called off anymore exploring for the night but will explore tomorrow, weather permitting.
Posted by Darren and Joyce Romero at 6:49 AM