February 12, 2010.  It rained all night and into the early afternoon.  However, by about 1:00 the rain turned to snow!  It didn’t stick nor did it last very long and it again became rain before finally stopping around 3:00.  It wasn’t a day to go out exploring.  Instead Maggie, Rico and I stayed nice and dry inside.  Joyce ran some errands and went to her dentist appointment.
The local news channels were all trying to get the best shots of snow covered streets and yards in the counties just north of us. It was really a historical event here in the south.  In fact I believe they reported this was the first time in a long time, that every state including Hawaii saw snow this winter season!  I had to laugh out loud yesterday when one of the Fox stations used Al Gore's book, An Inconvenient Truth as a snow gage with frequent live shots to show the increasing snow height!
I shot some pictures through the back window at the birds and pelicans in the salt marsh behind us. 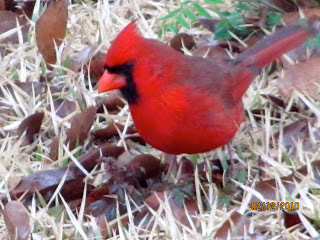 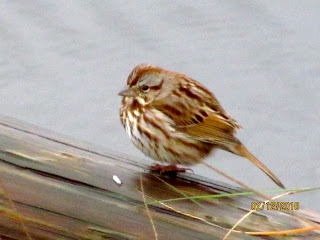 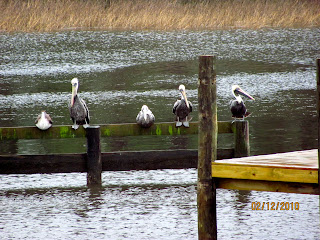 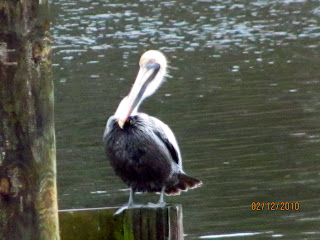 Joyce shot this picture of Rico and I watching the snow fall. 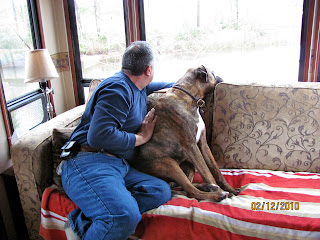 Our neighbor's bird feeder was busy all day! 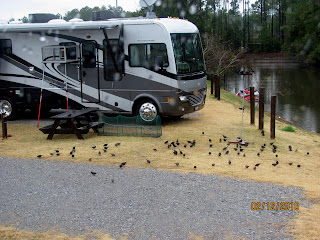 In the early evening, we went to Ashley and Andrew’s home for dinner and to work on our taxes.  Isn’t that a lot of fun!  What really aggravates me about the whole tax situation is the irresponsible spending by the government. But, I won’t let this turn into a rant.   I would certainly be in favor of a user based tax system and scrapping the current tax code.  I mean seriously, who really understands our complex tax system?


Ashley made a wonderful meal for all of us.  After working on our taxes we played a card game till it was time to take Maggie and Rico home.  They have become home bodies and were protesting to go home as it was getting late.  Ashley and Andrew's boxer, Ava wears them out playing!
Posted by Darren and Joyce Romero at 7:21 AM