Okay, so we had been going back and forth for several months now with the idea of replacing our car with something more suitable for our lifestyle. As you may recall at one point we almost bought a Rav4. Well, I've always wanted or compared everything we were considering to the Jeep Wrangler Unlimited, but didn't want to spend the money for one. So we pushed on with the car.


Well the other day I'm at the local Dodge dealership in Salida, Co. to get the Malfunction Indicator Light (MIL) checked out on my Dodge Dually. While I'm there waiting, I'm perusing the row of Jeeps. I got to talking to a very friendly and non-pushy salesman, Larry who let me take a 6spd manual Jeep Sahara out for a rather long test ride and then a long test ride in a Rubicon I was smitten!


I picked up my truck after a couple hours. I was told that it was an emissions EGR fault code that they reset with the hope that it was a fluke code set due to altitude or something bizarre. The service department was backed up and although I would have liked to have gotten an oil and fuel filter change, I would have had to make an appointment for next week.


When I got home I talked to Joyce about my test ride and she was interested in going back to do a test drive. We had decided about a week ago that we would seriously consider a Jeep Wrangler once we got to Colorado Springs or Denver.  So I had been doing some on-line research.


Once at the dealership, we got with Larry and she drove the manual Sahara and also the automatic Rubicon that I liked. Now I always assumed that Joyce would not like the more rugged off-road oriented Rubicon and would prefer the Sahara model which is more refined and not the off-road specialist like the Rubicon.


Anyway after some long test drives, Joyce decided that she liked the Rubicon and she wanted an automatic. So by the end of the day we had struck a deal. We took it home that night to be sure. The next morning we drove back to the dealership to find Old Betsy where we had left her in the lot. 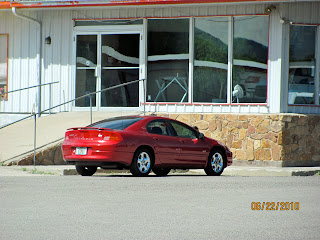 We completed the cash deal and signed all the paperwork. Now the only concern is if the dealership will be able to complete the tag transfer of our Florida plate from the Dodge to the Jeep. I understand that we have to mail the completed paperwork once we receive it from the dealership to our tax collector and pay the Florida taxes. The paperwork that we need to send to Florida is supposed to be completed within a week. The dealership gave us a 60-day temporary tag. 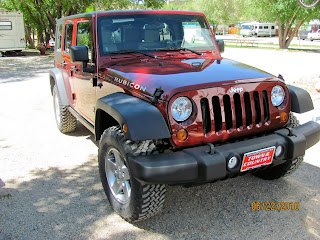 The color closely matches some of the stripes on our Carriage Cameo. 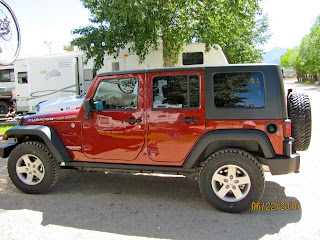 I took my father for a test ride up a forest road checking out the 4wd. The Rubicon is pretty rugged and has some off-roading features that I'll need to learn to operate. We climbed a steep dirt forest switch back road with no problem! There are plenty of off-road opportunities in Colorado. Aside from that, it seems that 90% of the campgrounds that we have been to, are on dirt or gravel roads. The Jeep is much more suited to the dirt than the car. The only downside is that the car was much better on fuel. It's too early to tell what kind of mileage we will get with the Jeep. The sticker said 15-19 mpg. Everything in life is a trade-off!
We think the Jeep Rubicon will work out well for us. 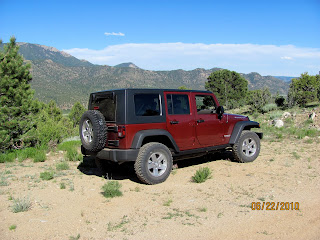 Posted by Darren and Joyce Romero at 12:21 PM