View Larger Map
Today was a travel day. We woke bright and early to cool temps. We quickly got packed and hitched after taking Maggie and Rico for their morning walk.

After getting hitched, I decided to back up and drive over to the dump station as my sewer hose was almost stretched to the limit in our site and the elevation for draining was not in my favor. The day before I had closed my gray tank valve as per my usual routine. As you know when camping you shouldn't (should not) leave your black water tank valve open during your stay. If you do then the liquids drain from your black tank leaving solids to further solidify on the inside of your black tank. It wasn't difficult to manuever over to the dump station so that appeared to be the best option. So the reason I close the gray tank valve the day before we move is to have cleaner water to rinse the sewer hose out after first dumping the black tank. After taking care of the dumping chore we were ready to hit the road. 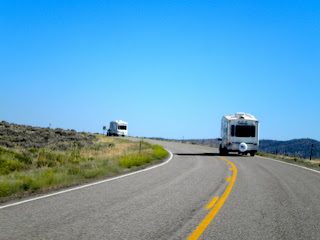 We were on the road by 9:00. Joyce followed behind my father and Karen for a while. We immediately began gradually climbing till we were at an elevation of about 8K ft. Todays trip was expected to be 187 miles so we were sure to fill up the day before. 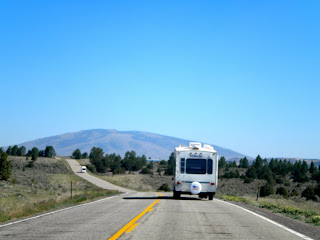 Before long we were crossing into Colorado. We passed a couple of Prong Horn Antelope on the side of the road. Unfortunately, we didn't get any photos. 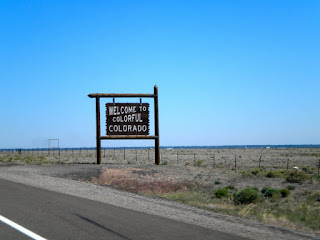 We were in the mountains and could see the snowy peaks of mountains over 14K feet known as "fourteeners. Some of the climbs were becoming long and steep. My rig handled the climbs and descents beautifully. 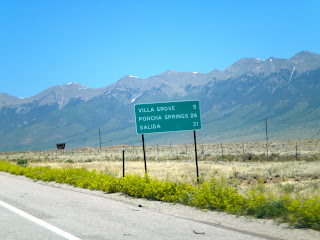 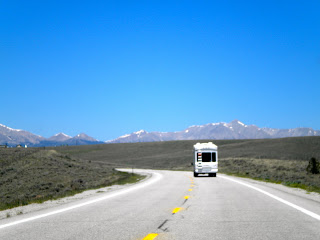 After about 3 hrs. we arrived at our destination, Snowy Peaks RV Park just north of the town of Buena Vista, Colorado. 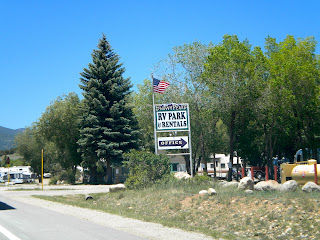 Buena Vista is a Statutory Town in Chaffee County, Colorado, United States. The population was 2,195 at the 2000 census. 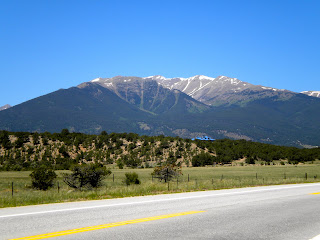 Buena Vista is located in central Colorado roughly midway between Salida and Leadville in the Upper Arkansas River Valley at an elevation of 7,965 feet (2,428 m). The area between Buena Vista and Salida is often referred to as the "Banana Belt," due to its relatively mild winters. The term "Banana Belt" actually refers to the fact that Buena Vista lies in a wide valley and is a high mountain desert with milder temperatures than nearby communities such as those on the I-70 corridor. The town lies at the base of the 14,000+ peaks of the Collegiate Peaks, Mt. Princeton, Mt. Yale, Mt. Columbia, and Mt. Harvard, of the Sawatch Range.
I'm not sure which mountain is which at this point, but I think the picture I shot above is of Mt. Harvard. The town and Snowy Peaks RV Park is surrounded by these beautiful mountains. 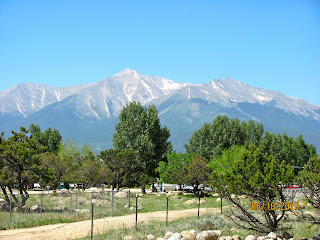 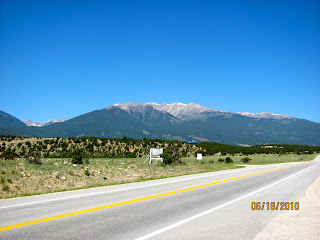 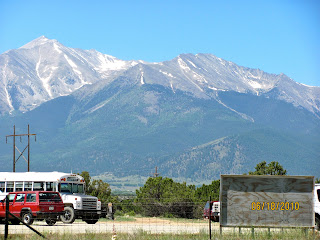 In summer, Buena Vista is a popular access point for world-class whitewater rafting, kayaking, and fly fishing on the Arkansas River, and mountain climbing and backpacking on local 14ers and the Colorado Trail. Sizable elk and deer herds attract hunters in the winter months, andbighorn sheep, mountain goats, and antelope are also indigenous to the area.
Buena Vista incorporated in 1879 and grew as a railroad town serving the local silver, gold, and lead mining industry, with three rail lines including the Denver & Rio Grande, South Park & Pacific, and Colorado Midland railroads. Many of the existing buildings of Buena Vista date back to this era, and were built in the 1880s and 1890s.
Note: The name "Buena Vista," Spanish for "Beautiful View," can often be heard pronounced locally as "Biewna Vista." This Americanized pronunciation was specified by Alsina Dearheimer, who chose this name for the town, which was officially selected over other names (Cottonwood, Mahonville) on the occasion of the town's incorporation. Alternate pronunciations include "Bwena Veesta" (Spanish pronunciation) and simply "Biewnie." Many residents simply refer to the town as "BV."
We got set up and registered for a week at Snowy Peaks RV Park. Our sites are "standard pull through" side by side 11 and 12. We are paying $216 for a week, $232 with tax. The rate includes full hook-ups, cable and wifi. 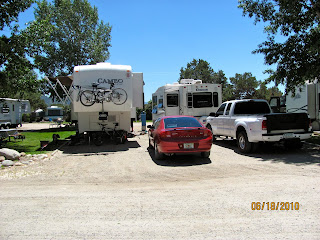 The park is small and nearly full. There are some festivities this weekend in the town of Salide. At nearly 8K ft. above sea level, the nights should be very cool and the days warm and breezy. Below are the views up and down our row. 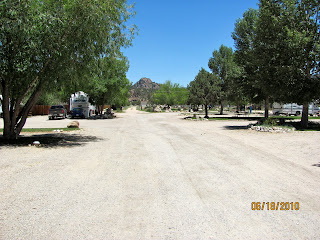 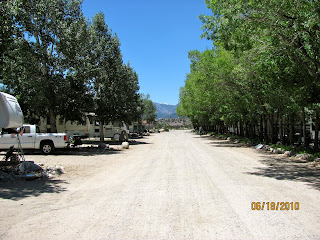 And out our back window. There's a lot to see and do, so we will have to get busy! 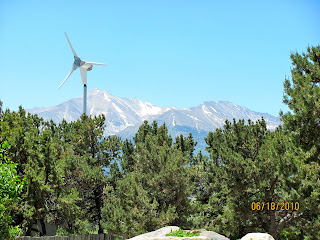 Posted by Darren and Joyce Romero at 10:27 PM