May 31, 2010.
Although the actual Memorial Day Holiday was Sunday, today was the weekday holiday. I want to personally thank and remember all those who have served our country or gave the ultimate sacrifice in defense of our great country! God Bless America and our service men and women and our veterans!


We spent the day on Davis Monthan A.F.B. at Agave Gulch Campground (Fam Camp). It was another scorcher with afternoon temps at 98 degrees. My father, Joyce and I drove around the base looking at the mothballed airplanes through the fencing and marveling at the sheer numbers. 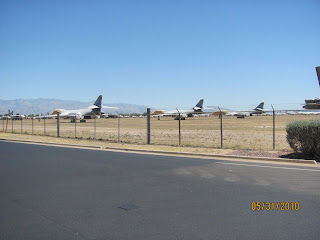 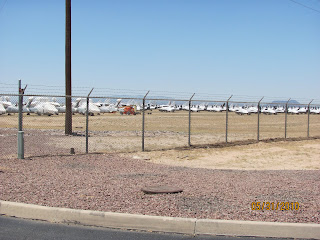 We came across a retired Air Force One! I guess more appropriately, a former plane for our Commander In Chief. 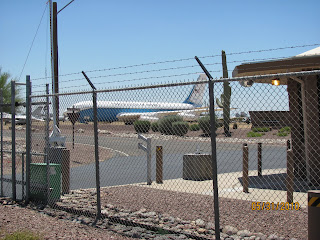 Afterwards we stopped in a small park on base and took some photos of aircraft on static display. Below, Joyce and my father, Henry under a B-52. 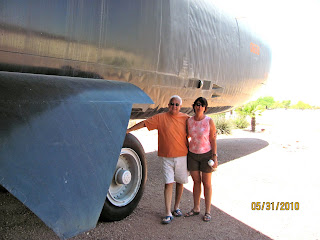 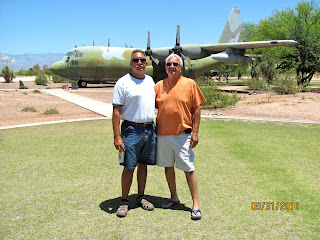 The rest of the day we spent making preparations to move on to Las Cruces, NM. the next day. Joyce and Karen went to the base pool. I stayed home and inspected the inside of my eyelids!
That evening, a neighbor was asking me about the Surge Guard I had installed on the power pedestal in line with my power cord. I was telling him how important I thought it was to protect our electronics in the rig when suddenly it cut the power to the rig. After some investigating, It turns out the Surge Guard died right then and there a month beyond its 1 year warranty. Great!
Later that night, my father and I watched the movie Avatar and enjoyed it. Joyce and Karen watched some chick flick in my father and Karen's RV. We got to bed late and tomorrow is a travel day!
Posted by Darren and Joyce Romero at 10:41 PM