The last few days were a blur. While at Davis Monthan A.F.B. Agave Gulch Campground, we took some excursions. On Saturday, we took a ride out to The Pima Air and Space Museum. We wanted to take a tour of the airplane boneyard. However, after arriving we learned that the tours weren't offered on the weekends because some of the base gates are closed. 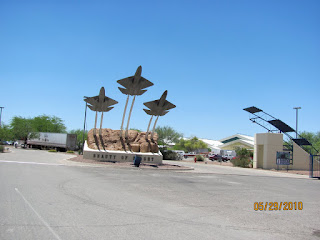 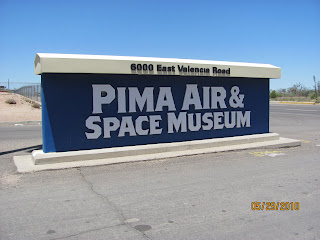 The only other option was to pay the $15 plus museum entrance fee to look at the static displays of aircraft. We weren't in the mood for another aircraft museum having recently toured the Naval Aviation Museum in Pensacola and the Eglin A.F.B. Armament Museum in Fort Walton.
So, we soon left the museum and traveled to downtown Tucson. We stopped at the Old Town Artisans shoppes. I took a picture of my father, Karen and Joyce outside one of the entrances to the courtyard. 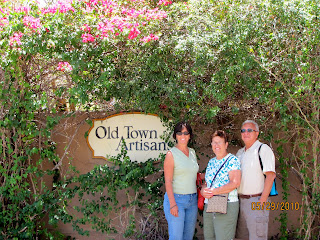 After looking through the shops and having a bite, we walked around the scenic downtown Tucson area for a short while as it was hot in the mid to upper 90's. Below is a bronze statue outside of an art museum. 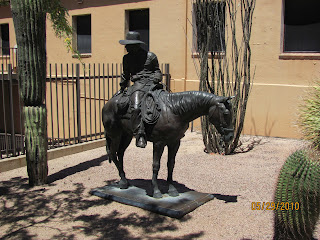 On Sunday Memorial Day, We met my cousin Terry and her husband Rick along with their daughter, Danielle for breakfast at the golf course on Davis Monthan A.F.B. They were in Tucson this weekend to help Danielle move to a rental house. Danielle is a student at the University of Arizona in Tucson. Rick and Terry were finished with moving Danielle so they decided to join us on a trip out to Kitt Peak National Observatory. 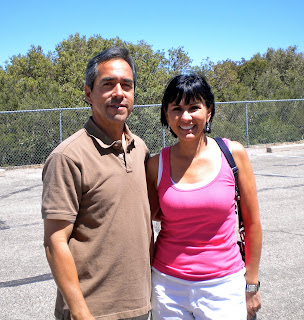 Kitt Peak is at an elevation of 6,875 feet above sea level. Mountain temps vary considerably from the desert floor by 15 to 20 degrees and it is often windy.
We were looking forward to the change in elevation and cooler temps! We drove the 50 plus miles out of Tucson to get to the peak and began climbing the 8% grades to the top. It cooled from the mid 90's in the valley to the upper 70's.  Ahhh just right! 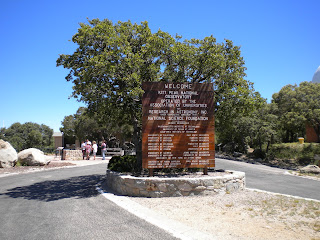 We got there just in time to catch up to the last tour of the day. After a classroom lecture on the dynamics of telescopes and scientific jargon I was beginning to glaze over! Fortunately, before long we headed outside for a short steep walk to one of the actual telescopes built on top of this mountain. 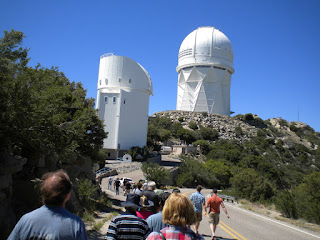 As advertised it was a bit windy... 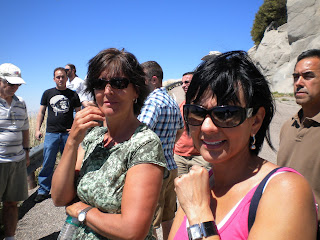 but the views were incredible. Below is a picture of the road we took to get to the top of the mountain. 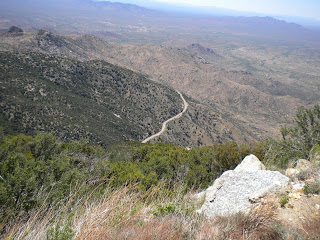 We continued on the guided tour inside one of the larger telescope buildings. The telescope we toured is located on the 20th floor of the larger domed building in one of the previous pictures. The views from that building were really incredible. Again, I began to glaze over as the guide spoke of all the technical abilities and specifics related to the telescope. 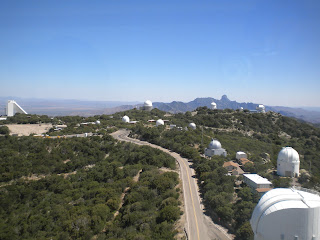 After the tour, we stayed on top of the mountain for a bit longer to have a picnic and enjoy the company. It was a fun and cool way to spend an otherwise hot afternoon.
Before long, it was time to say goodbye as Terry and Rick needed to head back to their home in Glendale, north of Phoenix, AZ. We really enjoyed their company. Terry pointed out that we had seen each other every weekend for the past 4 weeks! I think I had seen them maybe 4 times total before retiring. We hope to see them again and maybe spend some time and a Grand Canyon adventure together in the near future.

Posted by Darren and Joyce Romero at 9:54 PM