View Larger Map
My father's cousin, Donnie Gonzalez reserved a couple of campsites for us next to his at Elephant Butte Lake State Park. He had invited us to join him and his wife Rosalia and their friends for the weekend. They planned to do some boating and lots of cooking on the lake shore.

So we packed up early and were on the road by 9:00 headed north on I-25 towards Elephant Butte. 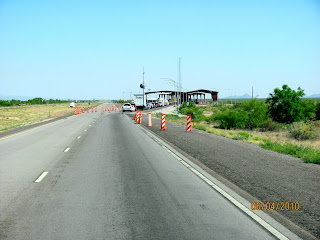 We arrived at Elephant Butte Lake State Park, NM about 11:00 after a 90 mile drive. We quickly got set up. 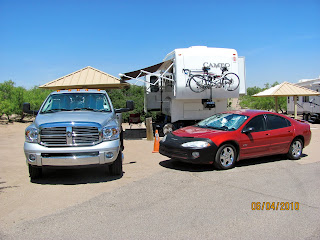 The three of us all parked together. 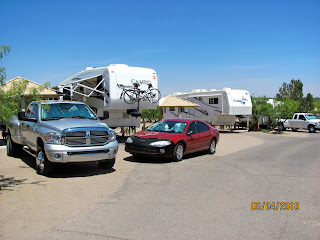 The rates for this park like all New Mexico parks was $14 per day for an electric site with water.  Our site, 24 is 50 amp. We also have to pay $10 per day for Joyce's car.
After arriving, we raced back to Garfield, to pick up my father's cousin, Billy Romero and his wife Deda for lunch in Hatch, NM., the chile capital of the world. We had a great lunch at the Pepper Pot Restaurant and then spent some time with Billy at his home in Garfield.
After a quick stop at Walmart on the way back home, we made it back by 5 p.m.  By now the temperatures were above one-hundred degrees. We stayed inside all afternoon.
That evening we drove down to the lakeshore within the park and met up with Donnie and his wife Rosala and his brother Adrian and his wife Ruthie along with other family on the lake shore. Donnie's friend Lorenzo had parked his trailer on the beach. Lorenzo's boat is in the water and Donnie's is alongside the trailer. 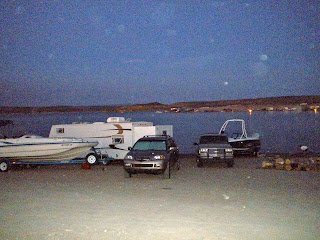 Donnie had caught some fish earlier and prepared and fried the fish. 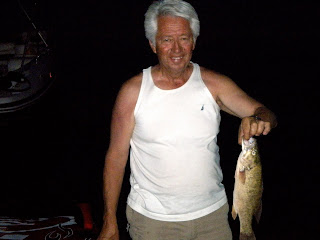 Donnie and his friend Lorenzo also cooked up a batch of Chicharrones. I had never eaten Chicharrones, they were tasty wrapped in a tortilla. 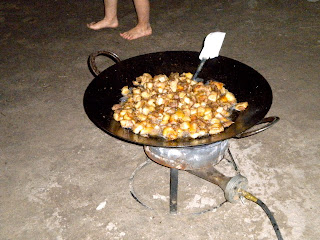 Before long we were full and exhausted so we called it a night and drove back to our campsite.
Posted by Darren and Joyce Romero at 10:26 PM